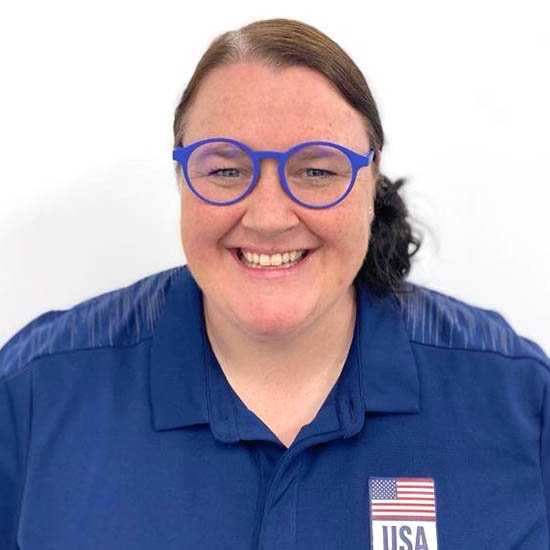 Erin Virtue joined the U.S. Women’s National Volleyball Team as a consultant coach in 2017 and moved into a full-time role with USA Volleyball in fall of 2018.

Since joining the national team staff, Virtue has played an instrumental role for the U.S. Women to consistently reach podium finishes. Team USA won consecutive FIVB Volleyball Nations League titles in 2018 and 2019, and qualification into the 2020 Olympic Games as major accomplishments with Virtue on the coaching staff.

Among her major responsibilities, Virtue is the team’s offensive coordinator and setter coach. She is also a manager within the USA Volleyball High Performance department.

Virtue is no stranger to the USA gym as a player and coach within USA Volleyball’s High Performance pipeline. She served as head coach of the U.S. Girls Youth National Team that captured silver at the 2016 NORCECA Women’s U18 Continental Championship and qualifying Team USA to this year’s FIVB Women’s U18 World Championship.

As part of her work within USA Volleyball’s High Performance pipeline, she observed the coaching methods employed by Kiraly with the U.S. Women’s National Team and implemented the same fundamentals within the youth program she led. In total, Virtue has spent 11 seasons coaching in the High Performance program, mentoring athletes in the Select (U16), Youth (U18) and Junior (U20) age groups.

She served as an assistant coach at University of Michigan for five years before arriving at Northwestern. She helped the Wolverines reach the national semifinals in 2012 in her first season, along with playing a large role in Michigan having the 12th best recruiting class as ranked by PrepVolleyball.com the same year.

Virtue has been recognized nationally for her coaching ability. She is one of only three coaches to earn the AVCA’s “30 Under 30” award three times, which is presented annually to honor up-and-coming coaches at all levels.

Prior to Northwestern, Virtue served four years as an assistant coach at University of Cincinnati and helped the program to a 101-36 record during her tenure. She began her coaching career in 2006 at Loyola University Chicago where she handled recruiting and worked with the setters.