The Rules of the Game

Volleyball is one of the most fun, exciting and popular sports in the world. The game, originally called Mintonette when it was invented in Holyoke, Massachusetts, in 1895, has developed into what we now know as indoor volleyball. The sport has evolved further to be played in various disciplines and formats across different surfaces based on the same set of core rules. 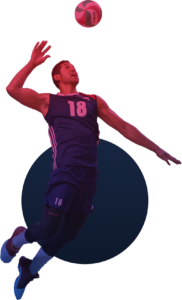 The basic rules of volleyball are the same across all variations of the sport. Play is typically organized with two teams organized in a formation on either side of a net. Each team attempts to score points by sending the ball over the net to their opponent, with the goal of having the ball hit the ground to end each rally.

To begin play, one team serves the ball over the net to the opposing team. Once the serve has been received (serve receive) the receiving team has up to three contacts before they must send the ball back over the net to continue the rally. The rally continues, with each team allowed as many as three consecutive touches, until either a team makes a kill, grounding the ball on the opponent’s court and winning the rally; or (2): a team commits a fault and loses the rally. The team that wins the rally is awarded a point and serves the ball to start the next rally. Players rotate clockwise around the court in a set order depending on who has possession of the ball.

Most rallies consist of the first two touches used to set up an attack, where the team tries to put the ball in the most advantageous position possible to score a point against the other team by sending the ball over the net in a way that their opponents are unable to keep the ball from hitting the ground. Players can legally contact the ball with any part of the body.

Visit our Rulebooks and Interpretation page.

The specific rules for volleyball competition vary in the United States. Internationally, there is a set of rules promoted by the FIVB which determines and oversees the rules for play between countries and at events such as the Olympic Games, World Championships and World Cup. In the United States, competitive volleyball rules vary at the collegiate level driven by the NCAA, at the high school level for interscholastic play determined by the NFHS, and for club play which are determined by USA Volleyball.

There are some specific and unique rules in place for beach volleyball. The most obvious difference is team size – beach volleyball is played in pairs, also called “doubles.” In the beach discipline, matches are typically played to 21 points, with players switching sides every 7 points to allow for equal playing conditions on both sides of court (often influenced by outdoor conditions like wind, sun, etc.). On the beach, the court size is 2m shorter and 1m narrower than an indoor court, allowing players to cover more ground and making it more difficult for the opponent to score on a well-placed shot.

Beach volleyball is played with a different style of ball from the indoor version, slightly larger and lighter. Double contact calls are much stricter in beach volleyball, allowing for very minimal rotation of the ball in the air after it is set, and players are not allowed to “tip” the ball over the net using an open hand. 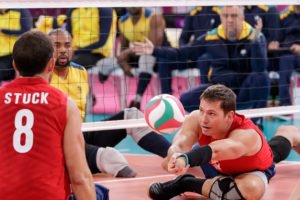 Anyone can play! Sitting volleyball is fun for disabled or able-bodied athletes. But if you want to play on the U.S. National Team or in the Paralympic Games, there are classifications for competition.

This is the format of play that is most popular for indoor volleyball throughout the world and is the fastest in terms of overall pace of play of all the variations of volleyball.

In 6 vs. 6 volleyball you see the greatest specialization of players with positions dedicated to passing/digging, setting and attacking/blocking. In order to gain the greatest advantage against an opponent, teams usually organize their player rotations to strategically place their players in the best possible positional combination to allow for offensive plays.

For example, many teams will run a 5-1 with one designated setter, or a 6-2 where two setters are designated, but each setter only sets from the back row to allow three front row players to attack.

Overall, 6 vs. 6 is one of the most exciting and powerful variations of the sport. Sitting volleyball is also played indoors 6 vs. 6.

This variation of the game (played on an indoor court, sand or grass) is typically played at a more recreational level. Each team has four players per side, and each player is permitted to attack at the net regardless of their starting position on the court. While players must maintain serving order, during play they can occupy any position on the court. 4 vs. 4 allows for a moderately paced variation of play that requires each team to cover more ground and allows players to compete in a less specialized style of play.

Coed variations of volleyball allow both male and female players to compete together on the same team. Coed competitions can be held with any format of play (typically 6 vs. 6, 4 vs. 4 or 2 vs. 2). This variation of play is often seen in recreational leagues and local tournaments, and allows both genders to compete and play together.

Reverse coed volleyball is a fun variation where male and female players compete on the same team in 4 vs. 4 competition played on a women’s height net, where the male players may only attack from behind the 3m line. This format of play is typically seen in recreational and local leagues and tournaments.

Beach volleyball is typically played in pairs or “doubles” but can also be played in 6 vs. 6 and 4 vs. 4 versions as well. Strategically, top beach teams are usually composed of one player who specializes in blocking and one player who specializes in defense. Both players can attack from any position on the court at any time, but generally one player will attempt to block at the net to keep an attack from coming over the net, while the defender covers the court behind the blocker. Players typically communicate who will cover which areas of the court via hand signals and verbal cues between plays and while a play is in progress.

Snow volleyball is an emerging discipline that is played on the snow, allowing three players per side. Snow volleyball typically requires unique equipment to help players compete in tough conditions, often including soccer cleats, gloves and a unique specialized ball specific to snow volleyball. USA Volleyball currently fields teams in snow volleyball to compete in international events with the long term goal of adding snow volleyball as a winter sport to the Winter Olympic Games. Learn more about the U.S. Snow Volleyball National Team.

That player in a different colored jersey is called a libero. The libero is a defensive specialist and they may replace any player in the back row without counting as a substitution. Under some rulesets, the libero may even serve, but only in one slot of the rotation during a single set. Internationally, liberos are not permitted to serve. Liberos also may not attack the ball from above the plane of the net. The position was added to the sport in 1999 adding greater defensive specialization to volleyball play and increasing the duration and intensity of rallies.

Once the ball is served and entered into play, players may move into their “playing positions” on the court based on their individual position to allow them to specialize in specific skills to help their team win the point. Players often align in strategic positions on the court to attempt to get to their playing position as quickly as possible after the ball is served.

Rally scoring means that one of the teams competing in a match will receive a point, whether the point is earned while the team is serving or not. In almost all areas of the world today rally scoring is the predominant scoring format in use.

In contrast, years ago there was a format of play called “side out” scoring, where each team could only earn points when they served the ball. The introduction of rally scoring helped to speed up the pace of play as well as the consistency of match times.

Yes, typically each team is permitted up to two timeouts per set that can be taken at any time between plays.

Scoring can vary by format or variation of play, but typically all volleyball is played at a minimum of best of three sets. In indoor volleyball at the collegiate and international level, matches are played best of five sets. In each format, the final set will be played to 15 points if it is necessary to determine the winning team. Points are scored any time a ball lands on the ground. Who last touched the ball and whether it lands in or out of bounds will determine who receives the point for that rally.