Increasing Participation Across the Board

For those of you not familiar with the game Speedball, let me briefly explain to you how it works. It is like Queen of the Court (or King/Monarch of the Court), however there are some key differences. First, there are athletes on both sides of the court waiting for their chance to participate, and both teams have balls at the ready to serve. Second, when one side loses the rally, the losing team leaves the court and the side of the court with the team that lost immediately serves the next ball.

Hence the name for this game: Speedball. There is little wasted time since a ball is served almost immediately. A simple comparison of Speedball to Queen/King/Monarch of the Court indicates that the emphasis on serving the next ball almost immediately speeds up the game substantially. When playing Queen/King/Monarch of the Court there’s a delay in serving the next ball because the winning team has to run under the net to occupy the winning court. Speedball allows for a greater number of individual athlete ball contacts, especially when using smaller team sizes.

For those of you not familiar with a game called The Competitive Cauldron, let me briefly explain how that works. It uses a round-robin tournament format, usually played 2v2 or 3v3. Everyone plays with and against everyone else in one training session. Matches are played for time. Adjust the length of the match to fit within the constraints of the time you have available. There is no need to win by two; when time expires, even if the ball is still in play, the match ends unless the score is tied. Ties are played out via sudden victory (i.e., the next point wins). Scores are recorded as “+” or “-“ points. If your team beats my team 10-5, your team would record a +5, my team a -5.

There are numerous benefits to using The Competitive Cauldron, including the tremendous increase in the number of individual athlete ball contacts, just like in Speedball. As team sizes decrease and focus on making three hits increases, it forces everyone to pass, set and hit in a competitive, game-like environment. Individual contacts per hour increase, in turn raising the volleyball IQ of our athletes.

What I’ve done is taken these two training methods – Speedball and The Competitive Cauldron – and combined them into one, named Spee-Dron, which I have played with my club team. It is best played when you have 12 athletes, but it can be adopted to play with eight or more. I have elected to make the teams 3v3. For years, I played The Competitive Cauldron and Speedball 2v2, but in order for Spee-Dron to work with 12 athletes, I have found it is better to play it 3v3 as there will be less standing around. In order to maximize individual athlete contacts per hour, you need to minimize athletes standing around, just watching.

Below is a simple diagram of Spee-Dron. Please note, this diagram shows playing the game 3v3. 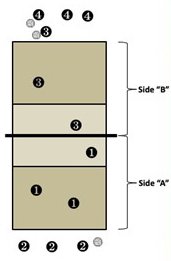 To provide a high-energy opportunity for athletes to maximize the number of ball contacts per training hour in a competitive, game-line environment.

A variation of Speedball that incorporates The Competitive Cauldron into what is dubbed Spee-Dron.

Played 3×3, full court (adjustments can be made to team size and whether you decide to play full court or skinny court). Teams waiting to play are off the court with a ball, ready to serve. The team that loses vacates the court and the team next in line on the losing side immediately serves.

Spee-Dron matches are six minutes each but are adjustable to ensure all planned matches take place within your available practice time. When the horn sounds, even if the ball is in play, the match is over except in the case of tie. All ties are played to sudden victory (the next point wins).

After each match, teams are scrambled and sides of the net (A or B) are changed.

Scores are reported as an aggregate from each team’s plus-minus while participating in the Spee-Dron.

To help you set up the matches for Spee-Dron, what follows is a table showing the team assignments for playing 3v3. Assume the athletes listed (1 – 12) are in alphabetical order by last name.