USA Volleyball’s response to COVID-19 and guidelines toward Return to Play.

By Kaitlyn Taggart and Clarence Hughes

Six Things I Learned as a New Coach

Note: this was written by Kaitlyn Taggart and Clarence Hughes, marketing coordinators at USA Volleyball. Both recently finished their first season coaching volleyball, Kaitlyn at the high school level, Clarence middle school. The following are lessons they learned that can be shared with future first-time coaches.

Being a first-year coach comes with many emotions: excitement, nervousness, eagerness, and, quite frankly, sheer panic over taking charge of a dozen young athletes that may or may not have played before. As a first-year coach, there are many factors of the game and your team that you should consider.

Rotation locators are your best friend

Some of you might be asking, “What are rotation locators?” Rotation locators are an effortless way for you to keep track of your lineup during a match. Write your lineup on the locator and spin the wheel each time a different athlete comes back to serve. This allows you to easily locate where players should be on the court and when substitutions need to be made. This can be a lifesaver for a first-year coach and for coaching first-year players who are just getting the hang of rotations.

Coachability is an underrated trait that should be admired

Would a player who doesn’t listen to your repeated instructions and suggestions be an asset to your team? It’s much easier to coach a player who has zero knowledge of the game but is willing to listen and put in the work than someone who doesn’t want to accept your coaching.

Athletes who want to better themselves and want to work with both their teammates and with you to become stronger, those are the athletes you want on your team.

They are the ones that will fight to the last point of every game.

Practice plans are a lifesaver

As a first-year coach, having to fill a couple hours of practice time can be intimidating. The first step to doing so is creating a practice plan and adding in the skills you want the athletes to work on. Maybe it’s serving, defense against the block, or even just practicing rotations and scrimmaging. Add these important pieces into your practice plan first and note how long you’d like to work on them. As the season progresses, practice plans will get easier because you can determine what skills the athletes need to work on based on how they play in their matches.

Always have a backup plan (or two)

Sometimes practice plans fall through because your athletes aren’t quite at that level of understanding you anticipated. That’s okay! This will happen less and less as you get to know who you are coaching and what their abilities on the court are. Still, it’s good to have a few backup plans that focus on different levels of the game, whether it’s beginning, intermediate and even a couple advanced techniques that you want to introduce them to. 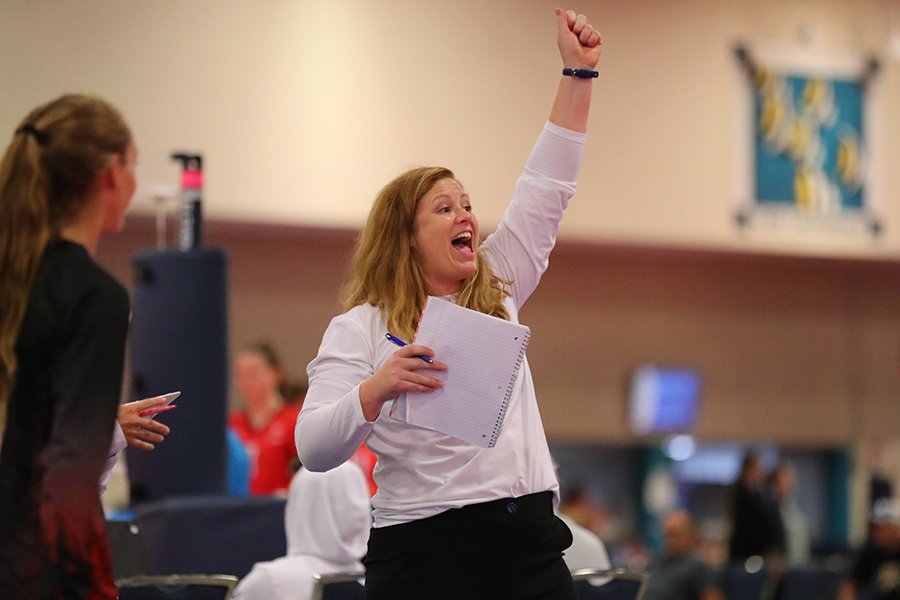 We all remember the “glory days” when we were in the shoes of the athletes that we have the privilege of coaching now. Some concepts, such as putting top spin on a serve or diving to keep a ball in play, come easy to some and only require one or two examples before practicing it to perfection. As a new coach, however, it is critical to remember that some athletes need more verbal instruction to understand some of the techniques that you’re introducing to them. Be prepared to repeat yourself over the course of a few weeks or months, or even find new ways to explain a skill, as the athletes you coach take the time to grasp these concepts.

Emergencies can and will happen

As a first-year coach, nine times out of ten we’re assistants that align with the head coach’s philosophy during practices and game days. That being said, you may actually be called upon to take full responsibility over the team(s) you’re assisting with. This could include acting as the head coach in game situations due to emergencies and/or unexpected life events. (Yes this happened to Clarence, and he cannot stress enough to stay ready for the unexpected). Over-communication with your head coach is key. Have copies of your lineups, rosters and anything else that the head coach usually handles during game days.

It is also critical to know your starting lineups, rotations and who is supposed to sub in and out of the game on any team you help with, even if you’re not the team’s head coach.

These are just a few things to consider as a first-year coach. The most important, though, would be to make sure that your athletes are having fun and enjoying themselves throughout the course of their season. The same goes for you too, coach !