In 1967, in response to the United States Olympic and Paralympic Committee’s challenge to all sports groups to expand and intensify their developmental efforts, USA Volleyball developed a volleyball skills contest and implemented it on a regional basis. The YMCA of the USA updated this skills contest with USA Volleyball staff help for use during their volleyball centennial celebrations. The purpose of this testing is to provide a fun alternative for people of all ages to see how they are building the skills they need to play volleyball and to encourage them to develop a lasting connection to the game.

The test has been set up so participants can be grouped in pairs, with partners keeping score for one another as they perform the various skills. In addition, suggested modifications are included for sitting volleyball when applicable.

Who should participate?
Boys, girls, men and women, divided into these age categories:

When to run your contest
The skills contest can be run at any time. Make a big event out of it. Spend time training your scorers for each event. Encourage everyone to participate regardless of playing ability.

THE SKILLS
Serving
Purpose – To develop precision in placement.
Competition – Each participant serves five balls into each of six zones on the other side of the net. Thirty serves in all. Bonuses allowed for perfect scores. Modification – sitting volleyball players use a 6mx10m court and a 1.5m net height.

Setting
Purpose – To develop confidence, accuracy and height
Competition – Each contestant sets five balls from each of three positions. Fifteen sets in all. Use a basketball goal 10 feet above the floor as the target.

Passing (bump)
Purpose – To develop confidence, accuracy and height
Competition – Pass the ball to oneself 100 times on the fly so that each pass goes higher than the height of the volleyball net

Vertical jump/reach
Purpose – To determine jumping ability
Competition – Height of jump is secured by making a mark on a tape measure on the wall from a standing position. Heels on the floor, side of body toward wall. Then jumping as high as possible and making a higher mark. Distance between marks is the height jumped. Modification – sitting players must keep one cheek on the floor when measuring their reach ability.

DETAILED INSTRUCTIONS FOR CONDUCTING AND SCORING THE CONTEST

Serving
Serve from the serving area with both feet and body behind the serving line. Attempt to serve five balls over the net into one of the six zones (marked 1, 2, 3, 4, 5, and 6 above). After five serves, move on to the next serving zone and attempt to serve five balls into that zone. You have a total of 30 serves. The court must be 30’ wide and 60′ long. The net must be 6’6” high for diggers; 7’ for setters; and 7’4″ for women and 8’ for men in the blockers, spikers and servers categories. A ball touching the line is good. A ball touching the net is a miss. Again, take all five serves in area 1, then five in area 2, and so forth.

Scoring instructions
Column 2 – Circle those trials made
Column 3 – Total circles made in column 2
Column 4 – Multiply column 3 number by this number (degree of difficulty of serve) and put the result in column 5. Repeat this process for each of the six areas. Bonus: Look down column 3. Count number of perfect scores, the areas where all five serves were made. On line G in column 3, record this figure. [Suppose all five serves were made in areas 1 and 2. The number 2 would be recorded in column 3 on bonus line G. Two times five would equal 10 as a bonus for perfect serves.] A total bonus of 30 is possible if all five serves are made in each of the six areas.

Position A is 4′ out from center of point on floor directly under the basket. Stand with both feet behind the line at position A. Toss the ball two or three feet in the air with one or both hands. As it comes down, set it into the air so that it drops into the basket. Take five tries at position A. Use fingertip control. Keep head up. Face direction of pass. Keep feet in walk/stand position, with one foot in front of the other. Keep elbows wide, free from body. Handle ball in front of face. 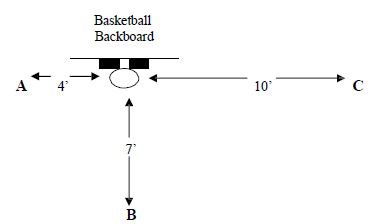 Scoring instructions
Column 2 – Circle those tries made. Use an X to mark half-points
Column 3 – Total circles and Xs in column 2
Column 4 – Multiply column 3 number by this number and put the result in column 5. Repeat this process for each of the three areas
Bonus – Look down column 3, count the number of perfect scores, the areas where all five sets were made. Half points do not count toward a perfect score. On line D in column 3, record this figure. [Suppose all five sets were made in area A. Then 1 would be recorded in column 3 on bonus line D. One times 13 and one third would give a result of 13 and one third as a bonus for perfect sets.] A total bonus of 40 is possible if all five sets are made in each of the three areas.

If a player gets off to a poor start, additional trials may be awarded until the player has used 100 passes. The trial with the most consecutive passes becomes the player’s final score. (Total possible points: 100)

Vertical Jump
Stand with one side toward the tape measure on the wall, heels together and hold a piece of chalk one inch long in the hand nearest the wall. Reach up as high as possible, keep heels on the floor and make a mark on the tape measure on the wall. For sitting volleyball, begin measuring at 40 inches. Player must keep one butt cheek on the floor.

Then jump as high as possible and make another mark as far up on the wall as possible. The number of inches between your ‘reach’ and ‘jump’ marks is the height jumped. A double jump before leaving the floor is not allowed. Give three trials and count the best score. Measure accurately between the marks. Use the scoring table below to determine points scored. 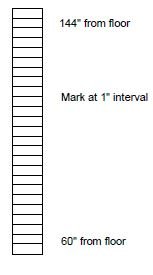 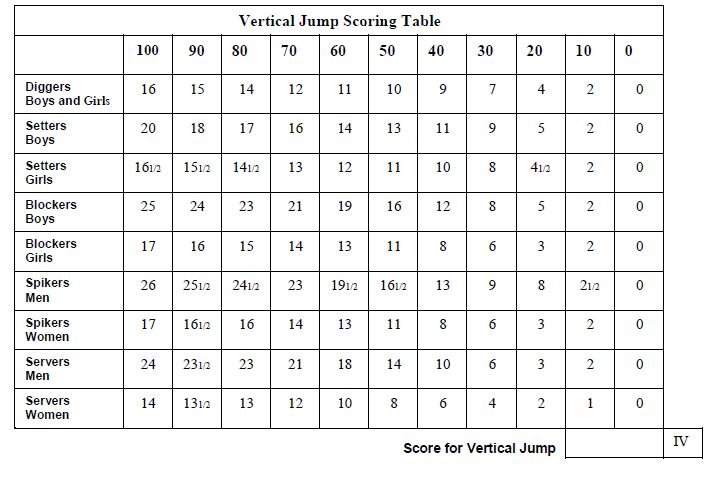 1. T  F  There are 10 players on each side in an official volleyball game