Tips For a Fledgling Boys Club

Kaizen Volleyball Club (Oklahoma City; Oklahoma Region) hit a major milestone this year: they offered a boys team at every age level, from 12U to 18U, for the first time.

Over the last few years, teams from the club have also earned podium finishes in the Club division at the Boys Junior National Championship (in 2017 and ’18), become the first boys team from the Oklahoma Region to qualify for BJNC in the Open division (2019) and qualified Opens twice again (2020). Two separate squads have qualified for the national championship over the last two seasons. We thought we’d ask Rachel Manriquez, vice president of Kaizen and coach of the Boys 16 Black squad, about building and sustaining a boys volleyball program. Here are five takeaways from that conversation

A few boys coaches and administrators from Kaizen and other volleyball clubs in the OKC area are currently trying to start a boys club volleyball league in middle schools and high schools across the state. The thought is to get more boys to try the sport, and that would be more easily done through a club at school. Of course, Rachel working in the athletic department at Casady School, a rare school that has boys volleyball in the area, as a coach and an assistant helps.

“I work with these middle school boys volleyball players every day of the fall, which I believe gets them hooked pretty early. Several of them have played club for us this year,” Rachel said. “The same goes for high school. Many of the kids we get have grown up playing several sports but start volleyball pretty late. While we have them during the school season, they see an exponential amount of growth, which is super exciting for them. Many just want to continue that growth and experience, leading them to play club. If more schools got kids involved at a younger age like we’ve been trying to do, I think the club participation would skyrocket.”

The increased amount of interest in boys volleyball commonly results in boys clubs growing in both size and number. Rachel cites similar school-based club leagues in the Dallas and Kansas City areas which preceded a large growth in boys clubs.

“[Coaches in Dallas and Kansas City] told us, ‘You’ve got to get one started there,’” she said. “I think that’s the best way to get boys playing, not just in our club, but across the state.”

Other ways Kaizen has used to draw new players: flyers and banners at tournaments, social media posts and giveaways, and word-of-mouth, particularly from the players themselves.

Anime is a Recruiting Platform

You may have heard of a show on Netflix called Haikyu!!, and for good reason: it’s about volleyball! More specifically, it’s an anime series based on a Japanese manga about a small boy who wants to become a great volleyball player. The show is a simple introduction to the sport, and it can inspire boys of all shapes and sizes to participate in the game. Take it from Rachel:

“We’ve had a ton of people reach out about their 12-13 year-old sons and they’re like ‘He just picked it up,’” she said. “We’re like, ‘Okay, if you want to come check out a practice, come out. See if you like it.’ We’ve had a couple that have come out to practice and turns out their kid found out about boys volleyball from that show.”

Even if it’s not a huge attendance driver to your club, watching Haikyu!! can always be a team bonding activity.

Working in a boys program can be different from working in a girls program. Having coached both boys and girls, Rachel has seen that boys programs can be a bit less stressful.

“The boys side definitely runs a little more chill, go-with-the-flow,” she said. “That’s not us directors, that’s just how the kids are. They’re in no rush to do anything.”

Rachel has coached boys exclusively for the last five years. As a former Division I volleyball player, Rachel thinks her particular intensity works better with the boys in her club.

From the ages of 11-14, the net height for boys and girls is the same. This rule allows boys teams and girls teams of the same age to compete against one another. Playing girls teams is a great way for boys squads in fledging boys volleyball territories to get in-game experience, even if it could come with a few grumbles. Rachel reports hearing from some of her younger athletes, “When are we gonna play boys?” 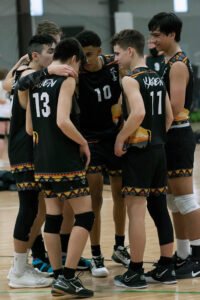 Be Prepared to Travel

From Rachel: “The 12s, 13s and 14s will play more local and travel to Dallas because it’s only three hours away from us [from Oklahoma City], but they mostly play local girls tournaments. But once they turn 15, they can’t play the girls anymore, and so that’s when a lot of the traveling starts.”

When net heights diverge at ages 15-18 (2.24 meters for girls, 2.43 for boys), boys clubs may only play other boys teams in sanctioned matches. In places with sparse boys participation, this may mean plenty of travel. This obviously depends on your club’s location and how many tournaments you and your athletes wish to compete in every year. Examine the opportunity for competition in your area if considering creating a boys program, and realize that travel requirements may be different from girls teams in the same area.