For those with little time to read my blogs and ponderings, the short answer is “In a 6-3 you teach HALF your players on the court the leadership roles and key skill of setting/running an offense, and in a 6-6, every player learns that key skill.”

What many coaches don’t realize is that you can run a “4-2,” or a “5-1” or a “6-2/0” that will be something younger players will be running when they move up the pipeline. More on that in a bit, including that it also means you can have less switching and simpler serve reception.

Right now, since I am asking you to consider losing a bit more, perhaps by focusing on the process – developing all-around players that the top levels seek, rather than the outcome (winning by having only your best setter set in the matches), let me share some key principles that make some nations even mandate a 6-6 until 14 and over play.

The American Development Model reflects these ideas above, as well as the concepts of keeping as many kids playing as long as possible. Brazil, the only nation other than the USA to be part of every Olympic volleyball competition since 1984, simply has a rule that all teams playing in the 14U level must have every player set one of the six rotations, thus a 6-6. Other nations simply do not have 6v6 play until they are at middle school or even older.

What Should You Do?

With these principles and examples in mind, should you do a 6-6 or 6-3, or what? For those wanting to know what it looks like, including serve receive formations and why, I will share that information at the end.

For me, it in part is based on the first year of experiencing the game vs. first year of playing 6v6. You see, when you watch the Thai and Lions Cup Elementary kids play 6v6, you are not seeing how much time they have done at a younger age playing 1v1, 2v2, 3v3 and even 4v4. The biggest mistake made in volleyball, especially in the USA, is that first-year players and second- to fifth-grade players play 6v6 to start. They are forced to “play the real game” by adults on “real-sized courts.”

At the elementary-age level, this must change to having smaller-sided teams on smaller courts and lowered nets.

When you consider how you learned to ride a bike – through all the fails but not being a failure – you of course did no drills, nor did parents hire a bike riding coach, nor did bike riding summer camps get offered. You not only learned to ride a bike by riding a bike, you learned it intrinsically so the retention of your skill is very deep/long lasting, and most importantly, you learned by riding your own bike. Imagine how long it would take to learn to ride a bike if you had 12 friends also learning, and just ONE bike. That is what is happening in too many practices and a solely 6v6 focus. Worse, it gets to a one bike and 23 others waiting to learn to ride better when you get to a match/tourney.

So, when a kid is 12, not matured at all physically, you want them to have the chance to experience multiple sport options – we call it sports sampling. Specific to our sport, you want them to learn all six of the core skills in our sport and when they get older – about 14-15, begin to specialize. This is also why we want our players getting more reps at all ages by playing more doubles volleyball on any surface. D

Don’t forget this great “recess” game where 3-6 kids at a school who love volleyball can get lots better faster by playing “Winners Stay On” (aka Loser Becomes the Net) https://www.youtube.com/watch?v=YLCM6UH9fBI, 1-2 vs 1-2 with no net, just a ball and two or more friends who want to get better during the lunch break or other times.

Around the League in 80 days is my story on coaching seven high school senior boys who started playing volleyball for the first time in their lives in mid-February, plus my son who had played doubles since the age of 10.

We ran a 6-3, and my son set two of the rotations, and we just missed the finals at the end of the season. It also is nice when parents let you know that their child made varsity as a freshman after coming into your program as a middle blocker, because the head coach found out that they had set an offense while playing front row as a middle.

Note that your younger teams may lose to programs who run a 5-1, where the program is already specializing, as your team will have three variations of setting versus just one. If you have read my blog/studied motor learning, the randomness of learning to hit off three teammates makes you a much better skilled spiker in the long run, a gift I feel important to give to younger players.

The thing is, I coach to develop amazing leaders, and a 6-3 allows me to develop those “quarterback” skills as it were, in not just the three players running the offense, but in one or two more in practice, so that about half my team is actually practicing running the system.

So, what about that almost-holy grail of less switching and simpler serve reception? Well, as you can see below in the 6-2/0 version of your reception pattern, the setter stands at the target spot all six rotations, with no switching in at all!

Due to the variance I have previously written about, the setter target should be more off the net. Which way do the players at the net not receiving go? That is up to you, coach – they may hit middle, they might immediately go hit right side (especially if they are a lefty!) or they can even move to hit outside on the first ball.

I prefer only 3-4 receivers as there are far less decisions lanes (aka “mine or yours?”) than seen in the youth classic five-person patterns. You especially get rid of the middle player who does the infamous move to the ball then head duck. Also note that since my teams are playing a great deal of 2 v 2 and 3 v 3 speedball and games, they are used to serve receiving the court with far fewer than five and even four players.

Unlike the 4-2 that many programs implement, the athletes in this 6-3 system know exactly where their setter target is, as the setter is off the net standing at that exact spot. Plus, they only have to learn two patterns, repeated three times. The only overlap concern you need to teach is when the setter is in middle back position 6 – the right back position 1 needs to stay to the setter’s right until serve contact is made.

When you have to play 6v6 games for youth, please give these 6-3 and 6-6 offenses a strong consideration. You will have better players in the future up your pipeline because of it.

Nobody knows if a 10-14-year-old will be a great setter unless given the chance. We need to stop picking setters based on height, i.e. being vertically challenged. We also need to understand that you will be a better hitter if you set, and a better setter if you hit. Let them learn all six skills when young.

I hope I never hear again, “I am too short to hit.” Just set the shorter kids more off the net and let them spike. These two systems better enable the role reversal needed at the younger levels. 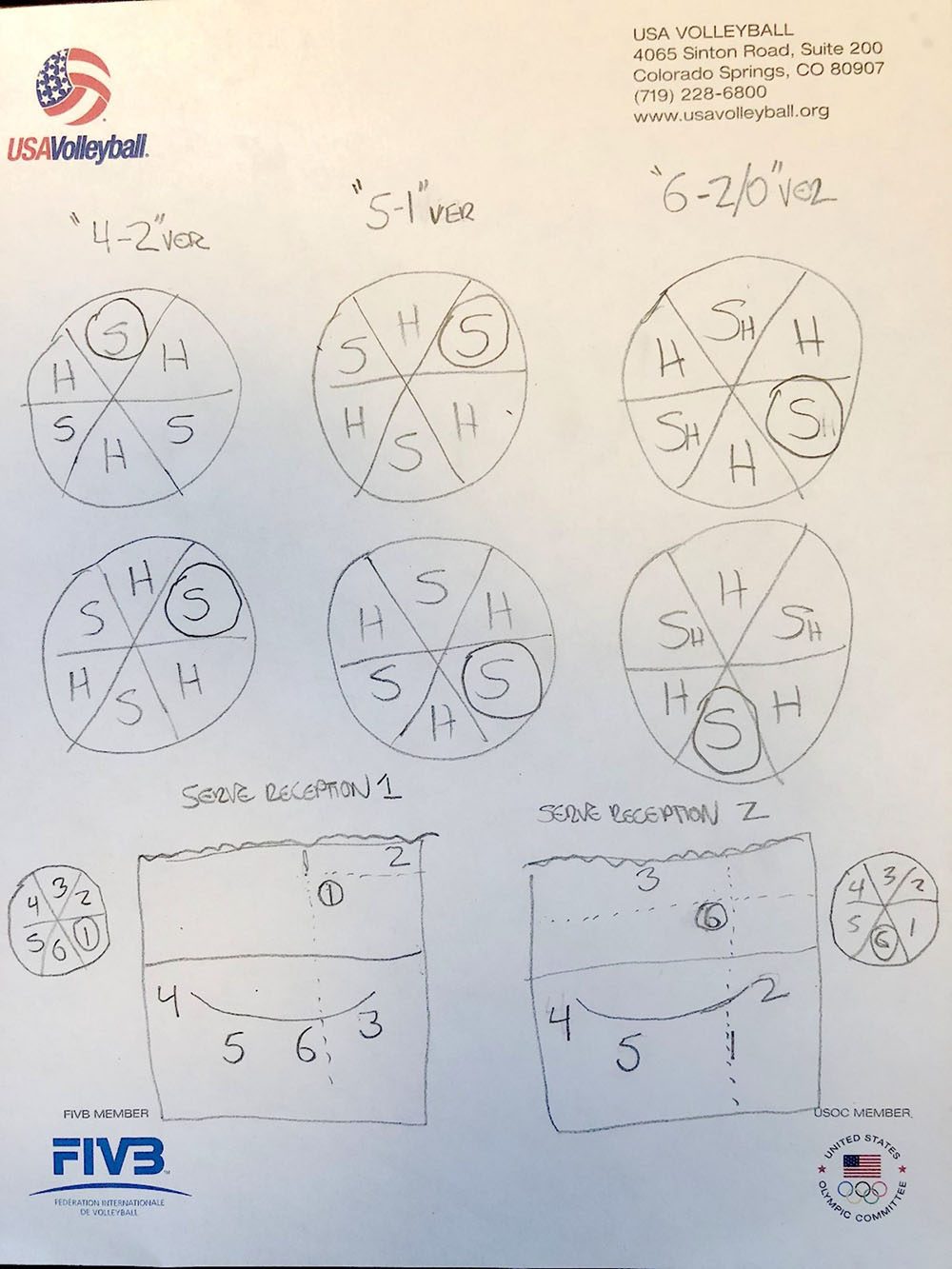