Gibb/Bourne, Claes/Sponcil both win on Second Day of Beach Play

Didn’t matter, though, as they opened the Olympic Games Tokyo 2020 with a 2-0 (21-18, 21-19) victory over Italy’s Enrico Rossi and Adrian Ignacio Carambula Raurich on Sunday night.

“It felt great to step on the sand and just play,” said Bourne after the match. “I thought I was going to have to take a month off and watch these guys compete. I had the opportunity to step in for Taylor [Crabb], and that’s a huge honor because I have so much respect for him.”

Gibb and Bourne’s partnership is one of necessity after Gibb’s original partner, Crabb, tested positive for COVID-19 and was removed from the tournament. Gibb and Crabb have played together since 2017 and are currently ranked fourth in the FIVB’s world rankings. Gibb and Bourne? They never had partnered before this week, not even during a practice session.

The new pairing got off to a strong start Sunday night. Bourne rocketed a ball to the sand for the first point, served up an ace for the second, and then Gibb forced an Italy timeout with a block. After an Italian sideout, Gibb/Bourne took the next three for a 6-1 lead. The U.S. didn’t look back, never trailing in the frame and winning the set by three points.

There was little separating the two teams in the second set, however. Neither led by more than two points after the early part of the frame, and they were tied as late as 19-19. At that scoreline, Gibb fired a shot that bounced off Carambula’s hands and out for an American lead. The U.S. clinched the win when an Italian attack sailed out of bounds.

Bourne, a first-time Olympian, led all players with 23 points. He landed 21 attacks and served up a pair of aces in his debut. Gibb added nine points, two from blocks. 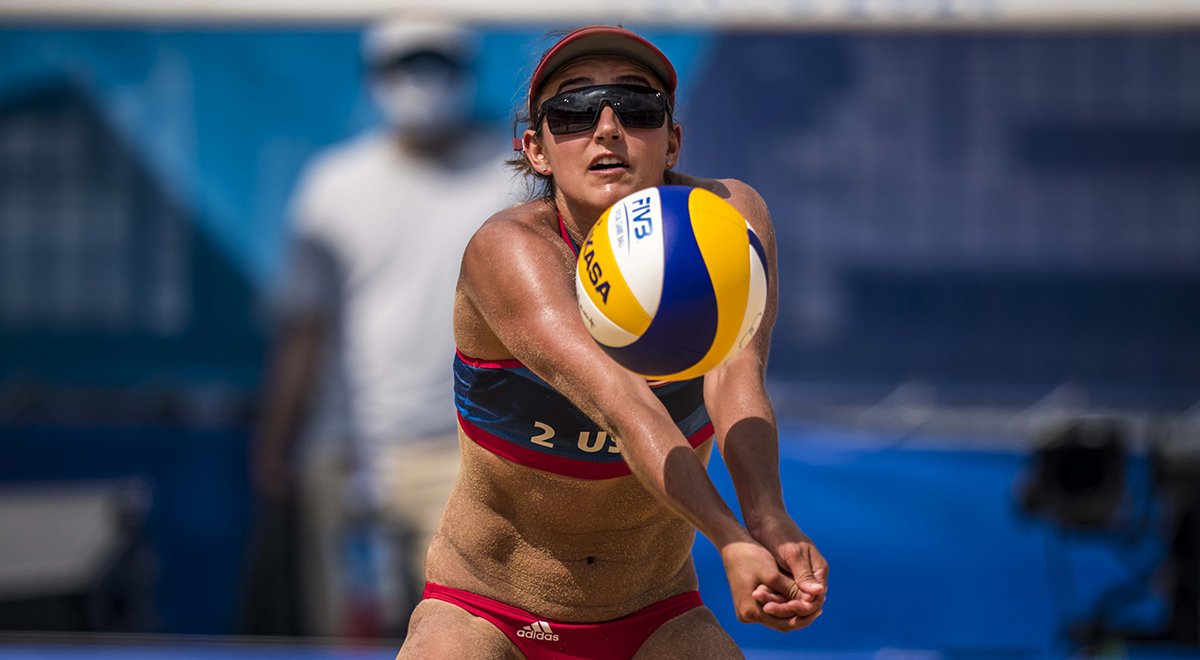 Trailing 9-11 in the third set, the Americans rattled off six consecutive points for the stunning victory. Sponcil started the rally by siding out, pulling the U.S. within one, and Claes leveled the frame at 11-all with a block. A Latvian attack sailed inches long to give the U.S. a lead, which Claes promptly doubled with another block. Two points later – kills from both Sponcil and Claes – and the match was over.

“We did a good job just thinking one point at a time and being really present,” Sponcil said about the third set. “It came down to some really good blocks by Kell. I couldn’t be more proud of her. It was so exciting. First match out there in the Olympics, going to three, and taking it. Really exciting.”

It was the first Olympic match for both teams, and nerves played a factor as the match’s first eight points contained four errors. The American duo calmed first, scoring four in a row for a 10-6 advantage. Another 6-1 run essentially clinched the frame. Latvia responded in the second set, jumping out to an early lead and never letting Claes/Sponcil fully erase the deficit.

The third frame was even tighter, seeing just three two-point leads until Claes and Sponcil began their match-ending rally. The U.S. won the first two points for a 2-0 advantage, and the Latvians took leads at 8-10 and 9-11.

In addition to being both newly minted Olympians, both squads are young. Sponcil (24) and Claes (25) are the United States’ youngest Olympic beach volleyball pair ever, and the Latvians (Graudina: 23, Kravcenoka: 24) are even younger. Sponcil, Claes and Graudina are also the first NCAA beach volleyball student-athletes to compete in the Olympic Games. Sponcil played at UCLA, Claes played at USC and Graudina will enter her senior year at USC in the fall.

Claes/Sponcil will have three more days to practice before playing their next match. They face Kenya’s Gaudencia Makokha/Brackcides Khadambi at 5 pm. Pacific on July 28 (9 am July 29 local), again at Shiokaze Park.