The Jacksonville, Florida, club won the title with two pairs entered in the tournament. Karsyn Smith/Sophia Pazhaniswamy took gold in the Girls 12U division and Sky Douglass/Ashton Kirton won silver in the Girls 14U division.

“(The athletes) were amazing,” High Performance Athletes coach Yamileska Yantín said. “They’ve never played in this kind of tournament before. I think they’ve learned a lot, and this is a great experience. These four girls opened the door for all our girls to come to this kind of tournament, enjoy the sport, and get better and better.”

In addition to the Club Cup, the top three finishers in each division won medals, and six specialty awards were named:

Most Spirited: Aubrey Sheppard (Girls 18U)

“We played really good the whole weekend, and we definitely played well with each other throughout,” Ackman said after the win.

They clinched the bracket title with a two-set win over Stephanie Gonzalez/Jaden White, although Gonzalez/White did need a lengthy medical break during the match. Neville/Ackman’s closest match of the weekend came in the semifinals, where they were pushed to three sets by eventual bronze medalists Aubrey Sheppard/Natalie Villalon. The bracket’s top seed, Neville/Ackman lost the first set but bounced back to win the semifinal, 2-1 (18-21, 21-16, 15-6).

“Competing against other high-level girls really pushes you to do your best and try to rise above.”

Rising above. Sounds perfect for a duo from Altitude Academy.

Gavin and Ashton Patterson lived up to their billing as the tournament’s most exciting team. The brothers from Naples, Florida, ran through the Boys 16U division, going 6-0 without losing a set.

Their precision wore down opponents, and they allowed only one foe to win more than 15 points in a single set. The brothers entered Sunday’s bracket play as the No. 1 seed, and they quickly clinched a finals berth with a 2-0 (21-10, 21-9) win over Carlos Pelaez/Nicholas Watson. In the finale, they downed Jake Manning/Ryan Huff, 2-0 (21-15, 21-13) for the title.

“It feels great to win,” the duo said after the match. “Super fun vibe here, and we loved to come out here and have some good competition. We were playing consistent, keeping the ball in and making our shots. That’s the most important thing.”

Both Bella Troncale/Elana Lam and Zoe Taylor/Melanie Silva went undefeated during two days of pool play in the Girls 16U division, so it was no surprise to Lam to see Taylor/Silva line up against them during the bracket’s gold medal match.

“We knew we were going to end up playing [Taylor/Silva], so we were plotting the day before,” Lam said.

The early strategy session paid off as Lam – the tournament’s Girls MVP – and Troncale downed their undefeated rivals in two sets (21-13, 21-17) for the title.

“I wanted to two-ball a lot, and we wanted to serve tough at them so they didn’t counter us every single time.”

Hannah Kemer/Lilliana Seldat entered the Girls 14U playoffs undefeated at 4-0, but they were seeded No. 5 in the bracket. In order to win gold, they’d have to win three matches on a hot and humid Sunday instead of two.

Apparently that wasn’t a problem.

They opened with a three-set win in the quarterfinals, and then met top-seeded EmmaJean Lehnen/Alana Whitfield in the semis, where they won, 2-0 (21-15, 23-21). In the gold medal match, they outlasted High Performance Athletes’ Skye Douglass/Ashton Kirton in three sets.

In that third set, they used a novel approach for the race to 15 points. Rather, the race to five.

“We played games of five,” the champions said. “We tried to get five first, then we tried to get 10 first before the other team. It worked out.”

Upon clinching the gold, the Campo brothers jumped into each other’s arms and fell to the sand.

“We’ve been practicing so much, we’ve been working so hard,” Luis Eduardo said. “To win this is a major accomplishment. It feels great”

Until Sunday, they had dominated the Boys 14U/12U division, holding opponents to just 59 points in four pool play matches, and even 15 total points during two contests Saturday. After a pair of lopsided playoff wins to reach the gold medal match Sunday, they finally lost a set, falling 15-21 in the first to Cole Ducote/Spencer Smith. The Campos rallied to win the next two and clinch the tournament win with a 2-1 (15-21, 21-16, 15-11) victory.

“It was tough, [Ducote/Smith] are really good,” Luis Fernando said. “First set, we weren’t communicating or playing well. In the second, we served tough, and then in the third…in the last points, we just did our thing.”

Karsyn Smith/Sophia Pazhaniswamy just found ways to get it done this weekend. They went 7-1 at the U.S. Club Championship, their lone loss coming in a three-setter. Three of their wins went three sets, too.

“The other teams were really good,” Smith said. “It was hard competition.”

Pazhaniswamy agreed. “We’ve won before, but I don’t think it’s ever been quite this big, though.”

In the finale, they met Cheyenne Santana/Dahlia Santana, the team who had beaten them a day before. The match predictably went three sets. Smith/Pazhaniswamy pulled it out in the end.

“We really had to keep fighting for it,” Pazhaniswamy said. “Communication was big for us.” 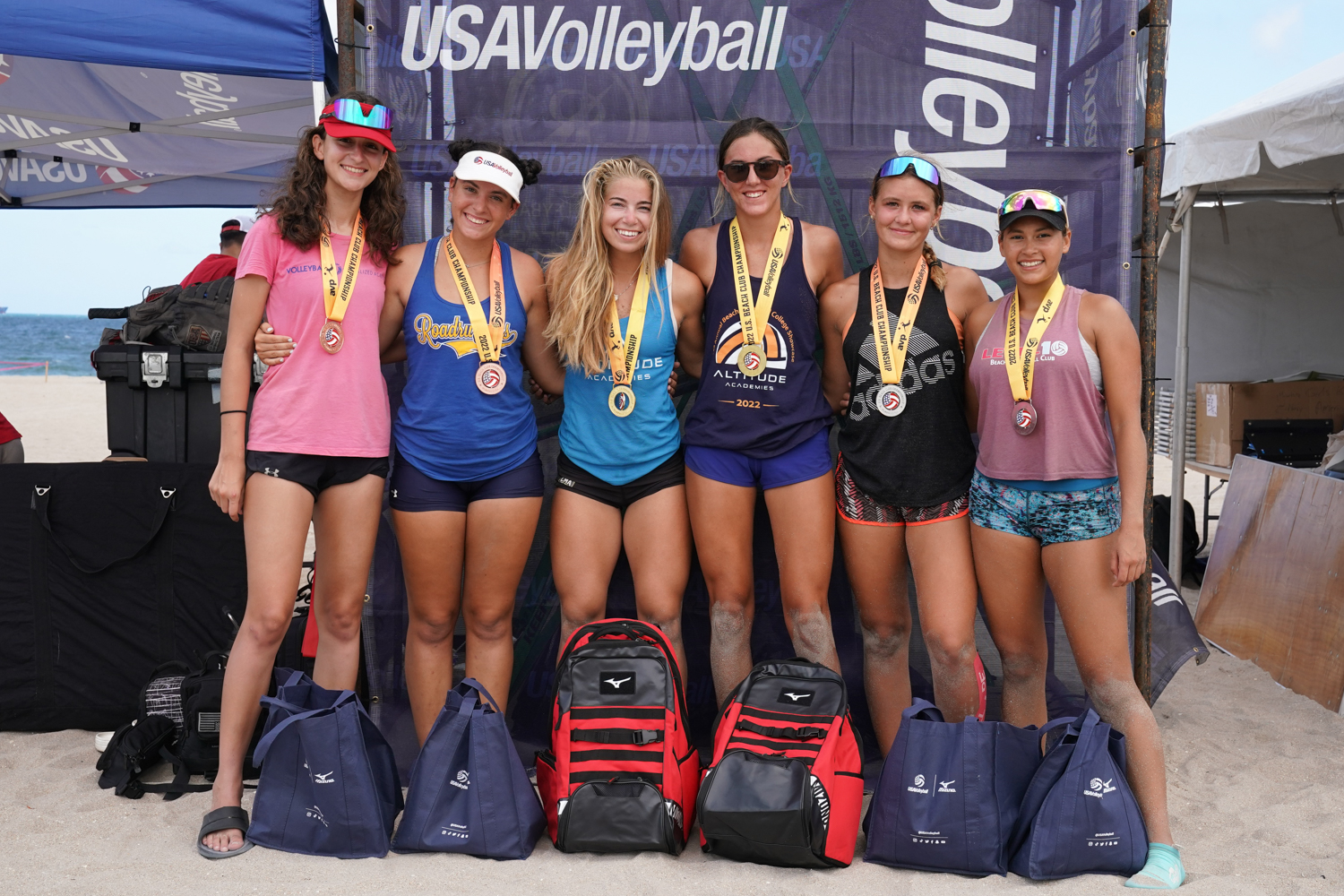 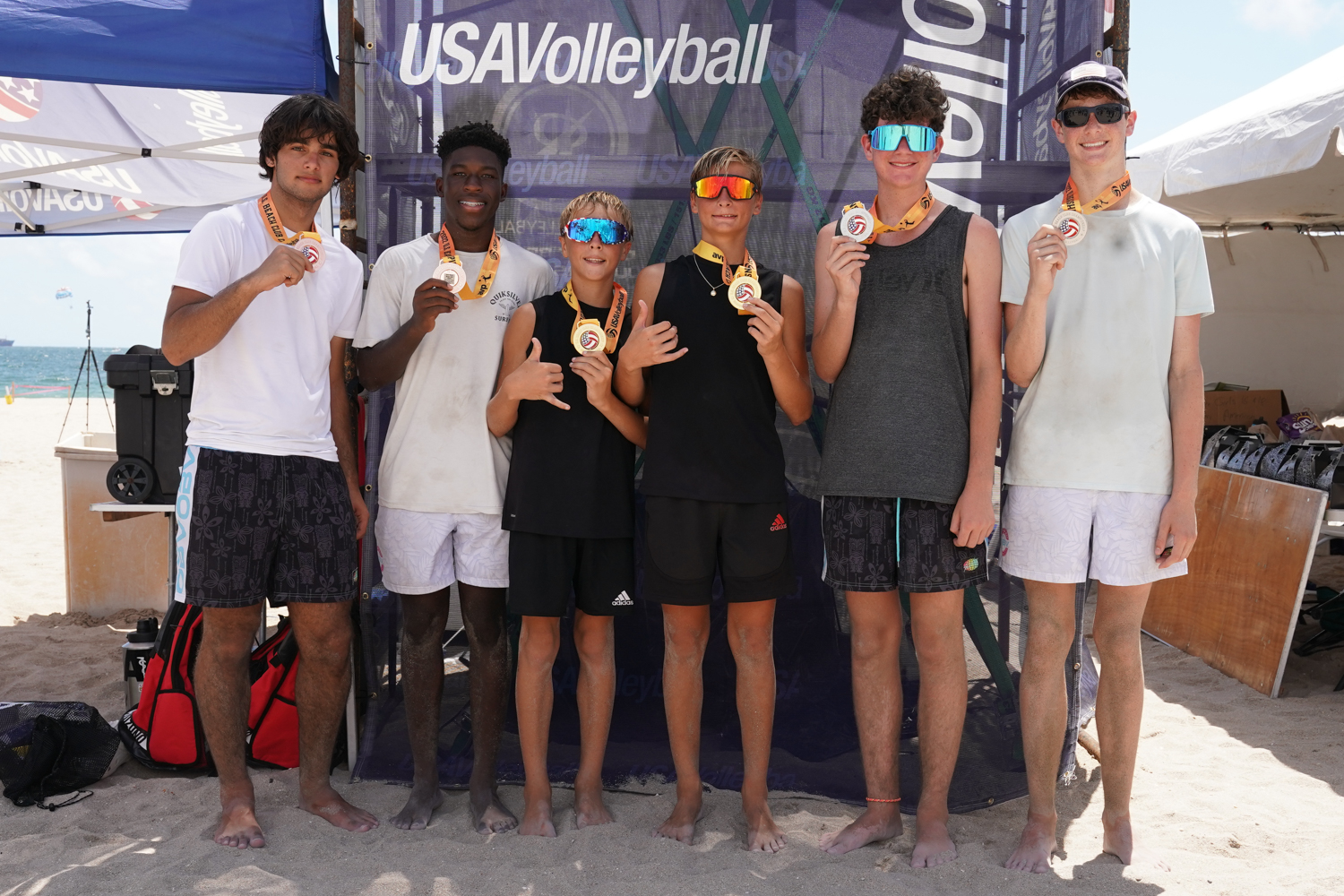 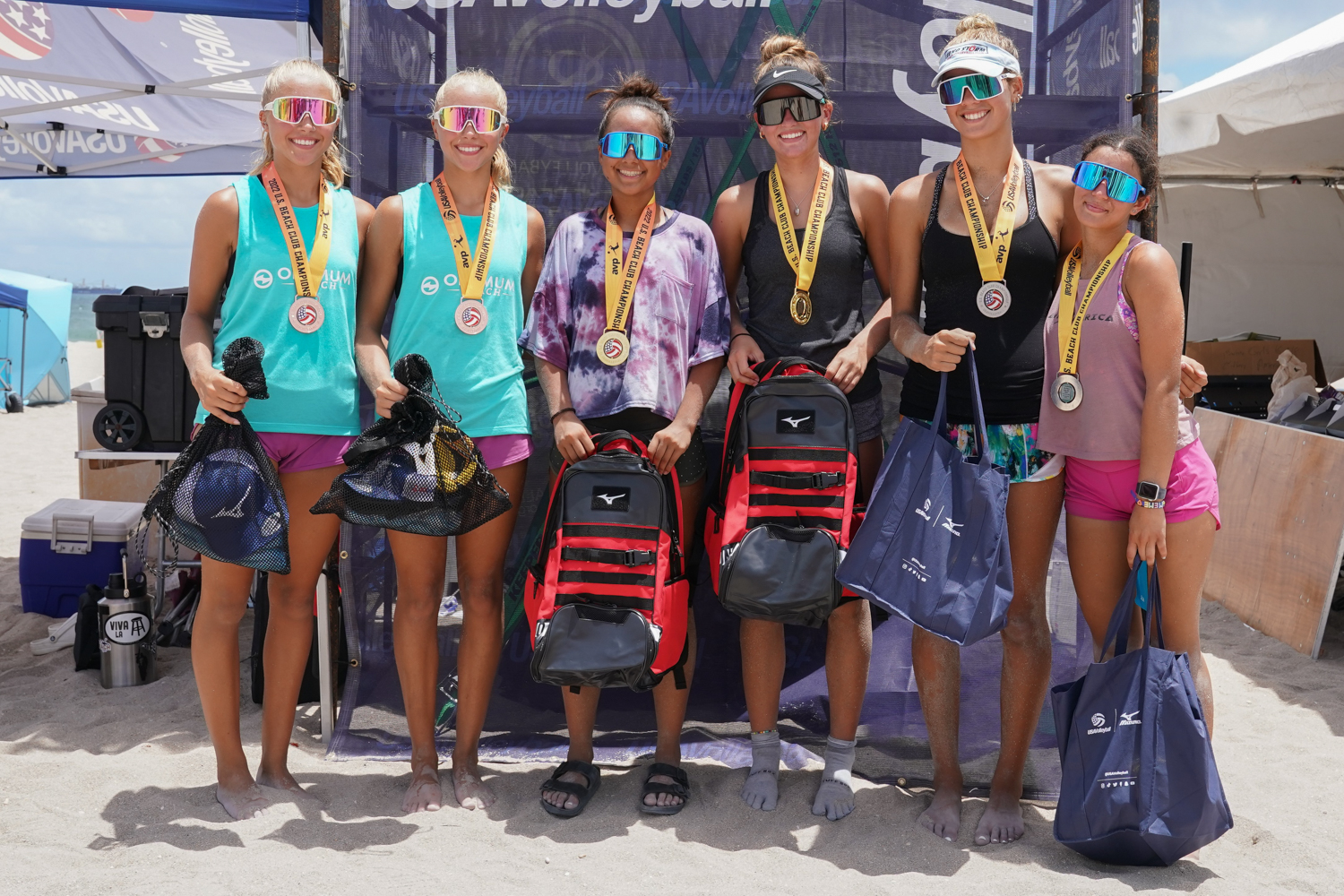 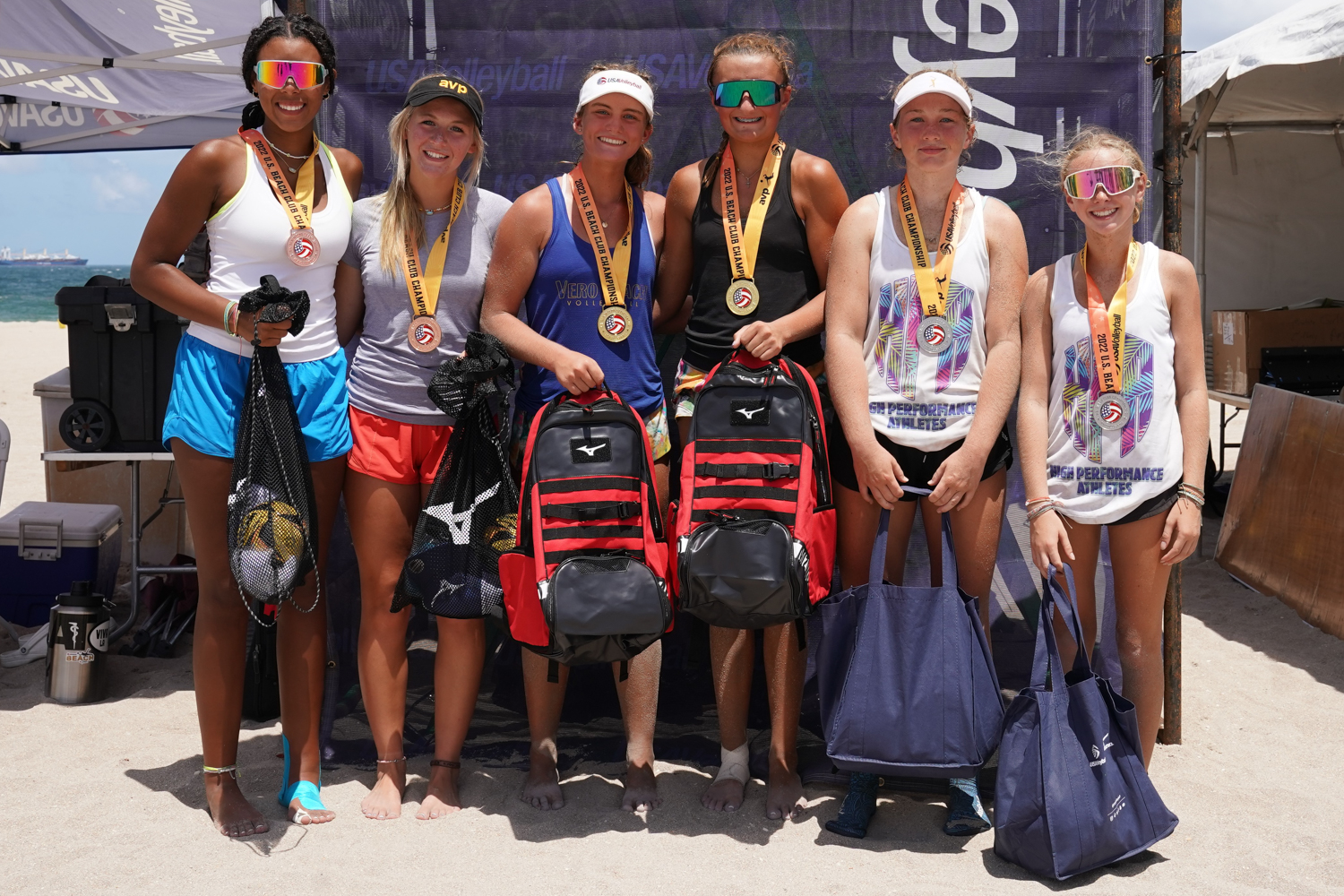 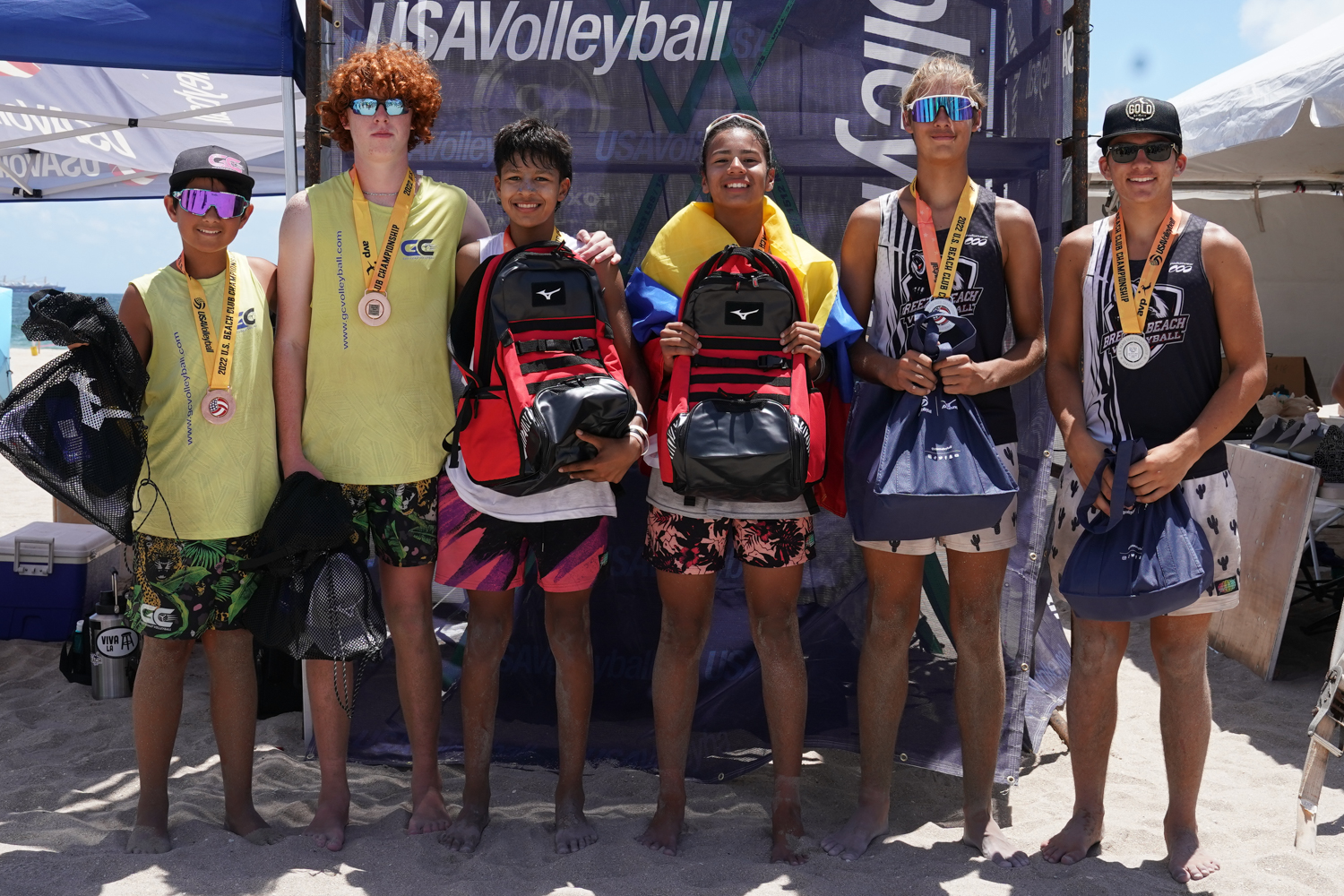 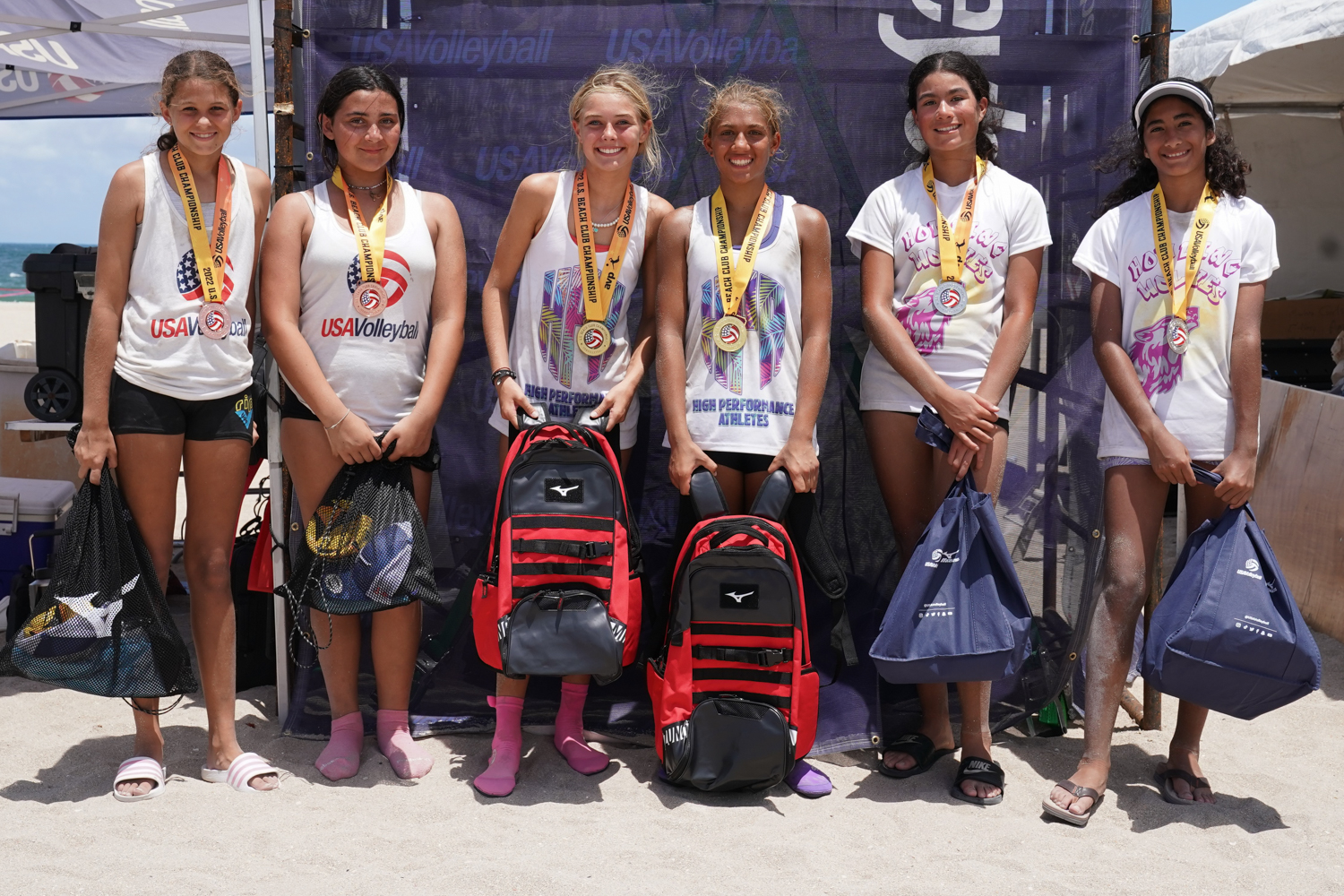