After two years on the Cathedral High School boys volleyball team in Los Angeles and one year of club, he thought his volleyball career was over. He enrolled at Morehouse College, a men’s Historically Black College/University (HBCU) in Atlanta and, for three years, proceeded with his studies.

On Saturday, Feb. 5, his career resumes.

Concepcion and the rest of the Morehouse College volleyball team will play its inaugural match Saturday against Webber International University. The match will cap a two-year effort to build a volleyball program at the school. In 2019, Morehouse and five other HBCUs received a grant from First Point Volleyball Foundation and USA Volleyball to form a collegiate men’s volleyball team. This season, after a year’s delay due to the pandemic, these teams are finally taking the court.

For not being well known in the Black community, there’s a bit of volleyball experience roaming the Morehouse campus. Head Coach Emory Lightfoot has two players who signed specifically to play volleyball for the Maroon Tigers. The rest, including Concepcion, are walk-ons who joined after an open tryout last semester.

“We had 52 guys show up for the tryout,” Lightfoot remembered. “[I was surprised that] there was so much talent already on campus … the majority of the team played high school volleyball.”

The plethora of on-campus talent was a stark contrast to Lightfoot’s experience recruiting players during the pandemic. He joined the Morehouse staff June 1, 2020, and was originally limited to recruiting athletes digitally.

“The recruiting process was more of a faith test,” he said. “The only thing I could go with was what I was able to see via Zoom or social media. Not being able to build a rapport with those two signees was a bit difficult.”

It didn’t get much easier from there.

“We’ve been shut down three times,” he said. “At one point, I was actually heading to Puerto Rico for recruiting and got a call that morning – while packing – and was told we were on a no-travel restriction.” 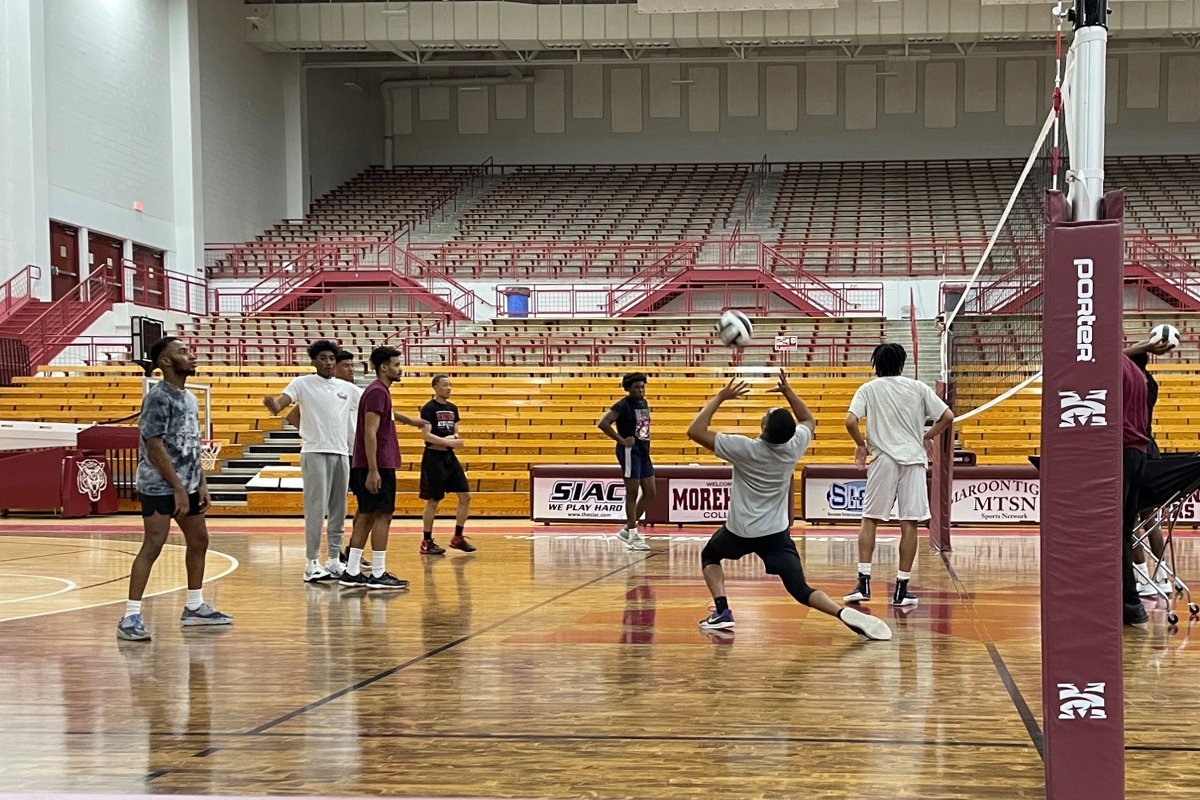 There is much more to building a volleyball program than finding players. Lightfoot’s had to prepare the court, insert poles, make the schedule and market the team, both on and off campus. With the latter point, he’s pushing the team to help spread the word about Morehouse volleyball.

Concepcion’s taken that to heart. He’s using his role as co-captain and setter to make that happen.

The historical nature of Saturday’s match is not lost on Lightfoot, nor is the fact that it takes place the first weekend of Black History Month. “You couldn’t write this in a story and have someone believe it’s actually happening this way,” he said. “We were supposed to start last month, the day after [Martin Luther] King [Jr.]’s birthday. Now we get pushed back to February 5. All of us have now become a historical moment of Morehouse because this is an inaugural team. It has so much grandeur, it’s just so timely.”

Concepcion appreciates the magnitude of the moment. He acknowledges and honors the fact that this team is setting a foundation for Morehouse volleyball going forward. On Friday, though, in that historical first match, he’ll be more concerned about resuming his career with a win.

“I understand everything’s new, the atmosphere, the energy’s going to be different,” he said, “but coach has been telling us to always stay in the game, stay focused. It’s my first time playing setter [he played middle in high school], but the training I’ve done since, it’s ultimately been made for this moment.”