Over the next few months, USA Volleyball will honor national team athletes who have decided to hang up their USA jerseys. Whether on the court or in the sand, USA Volleyball thanks these athletes for their hard work and dedication over the years.

We start by catching up with two U.S. Beach National Team athletes who ended their international careers in 2020: Ryan Doherty and Stafford Slick. Since their retirement from beach volleyball, they’ve found other work and hobbies while managing to stay involved in the sport. 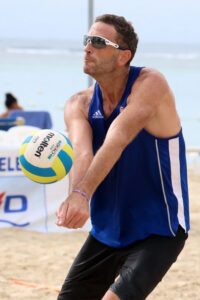 How’s retirement going? “Being an athlete for so long and moving to a non-athletic realm, I saw how easy it was to move way too far in the other direction. You eat like crap and you don’t work out nearly enough. I’ve found a happy medium now, but I went way too hard in the other direction and found myself in pretty bad shape pretty quickly, which was fun while it lasted.”

Future plans? “Now that I’ve scratched that sports itch, I’ve always been interested in finance and investing. I recently accepted a position with Raymond James. I’m going to be a senior product specialist for their alternative investments division. It’s really interesting for me, I get to understand some complex investing characteristics and help people make better decisions regarding those. I’m really looking forward to that.”

Do you have any memories that stand out? “Before I played professional beach volleyball, I had never left the country. I’ve now traveled to 20-plus countries on five continents. A lot of my memories from the international travel and playing on the U.S. National Team was just being in these locations, places I would never see without competing for USA Volleyball. One memory that sticks out was me and a bunch of other guys on the National Team were all in Gstaad, Switzerland. We borrowed these motorized bikes so they could help you get up the mountainous terrains in Gstaad, and we went on these bike rides through the mountains all the way up to this little café at the face of a waterfall.

“It was one of these cool experiences that you wouldn’t have any other way, getting to ride around with Phil Dalhausser and [Sean] Rosenthal and Jake Gibb, not worrying about the competition part and just shooting the breeze with some of your buddies.”

What did volleyball give you or teach you that you wouldn’t have had otherwise? One thing sports in general teaches you is how to improve at things: if you fail, you train, you fail better, you train again, you reset. That feedback loop has been very helpful in my life outside of sports. Plus, all the other attributes that you gain from being an athlete: being humble, being able to appreciate the small victories, those moments where you’re put in your place pretty quickly, it’s all very helpful in my new career outside of sports.”

Are you going to stay involved in the game? If so, how? “The most experience I have in beach volleyball now is when I help my girlfriend run drills. She plays quite a bit in events and tournaments, but aside from that, I really don’t spend any time on the court or coaching. I am on the nominating committee for the Board of Directors for USA Volleyball, making sure that we’re (bringing in) the right people to lead the organization. That’s my one small way of giving back.”

“There’s also specific strength trainers. At first it was Tim Pelot and then it was Anthony Darmiento that showed me how to physically improve as a beach volleyball player. It’s a very different training regimen than it would be as a pitcher, which was my whole background. Plus, gotta thank Sean Scott, who was one of the best technical blockers while I was first coming up. He was always very helpful in terms of lending his expertise, being able to support you during those first challenges that you’re gonna face. ’He taught about the technique but also the mindset of how to continue to improve and get better as a beach volleyball player. There’s too much to really lock in on any one key, but USA Volleyball obviously was very helpful in helping me achieve what I wanted to in the sport.” 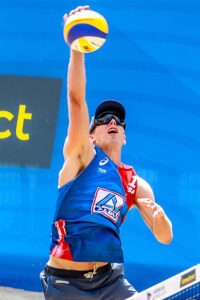 How’s retirement going? “Retirement’s been good. It doesn’t feel … I don’t know, retirement kind of comes along with this idea that you’re going to be resting. I have three kids, and my wife and I moved with our kids to San Diego in January. Moving and doing some things down here in San Diego, I thought I’d still be hunting with Billy Allen to see the Olympic qualification through, but because of some of the finishes and results we had, it wasn’t a realistic result for us anymore. I started to consider some other alternatives. In my heart of hearts, the push for Tokyo was probably going to be my last push internationally. It’s bittersweet to have it cut short because of Covid, but at the same time, I think it forced my hand into figuring out what the next steps were. That was a silver lining to that whole experience.”

Future plans? “I’m at full throttle in the new career. I’m actually working with Arthrex, a medical device company and specializing in sports medicine. It is a massive undertaking to learn everything in order to be successful in this industry. Basically, my first year is going back to school. I’ve been learning anatomy, physiology, biomechanics, pathology of injury, stuff like that. It’s been a full send back into academics, reading, studying and gaining experience in the operating room. It’s been a whirlwind and has kind of taken the edge off [retiring from volleyball]. It’s been a really cool transition, it’s a pretty interesting career path to start down.

Do you have any memories that stand out? “I was fortunate enough to have been a part of the USA pipeline since 2009, and I have a unique perspective being in the pipeline from the beginning of the program and now to see where it’s at today. It’s a night-and-day difference and a testament to USA Volleyball and their commitment to creating a pipeline for other athletes looking to play international beach volleyball. It was cool for me to go from a young man in Minnesota who wanted to make a career on the beach to playing the World Championships in 2019 That ties into my favorite memory with the National Team. We upset the reigning world champion and reigning Olympic champion in Bruno and Evandro on July 4th in Hamburg in 2019. I feel like that was my favorite tournament, probably the highest level of competition I’ve ever competed at, and most certainly the best finish we had (T-9th). That was probably the biggest highlight of my career on the National Team. I won a couple medals at some three-stars, but to perform like that, to upset a team like that on a big stage, was really special for me.”

What did volleyball give you/teach you that you wouldn’t have had otherwise? “One of the cool things about professional beach volleyball is that you travel all over the world and meet people from different cultures and places, so you open yourself up to new experiences. That helped me be ready to step into a role [with the medical device company] that I was, at the time, not at all prepared to be in.

“It allowed me to be more comfortable asking questions and to develop relationships with the surgeons, nurses, surgical techs, physicians and assistants. Having been on a number of teams, and for Team USA, too, that team atmosphere was easy to step into.

“I liken it to beach volleyball in a lot of ways to my territory lead because I was basically his understudy. He was my replacement for Billy. He was my partner, we went to accounts every day together, we were in the operating room together, we were asking questions and playing off each other to get me up to speed and get me better prepared to start covering surgeries by myself.”

Are you going to stay involved with the game? If so, how? “I think I still have a few good years left in me, and I think Covid cut me short. I’ve found a contingent of players in San Diego, we’ve been able to train and play. Some former national team indoor guys like David Lee’s down here, Paul Lotman, Will Price… there’s some big guys that are still hungry to play and train. It’s a little less formal now; we had a group of eight guys this past weekend, and we sealed it with a barbecue. I don’t have necessarily the time right now to get involved with coaching, but I think that might be in my future at some point. If not coaching, then at least coaching my kids. They’re a little young yet, but I’d love to introduce them to the sport that brought me so much.”

How did you get your professional start, and how did USAV help? “For me, it’s unique in that I didn’t necessarily start playing volleyball on the AVP. I cut my teeth training with the elite development program and then playing NORCECA events. I think I’ve played more NORCECAs than any other player in the U.S. I don’t know if that’s a title that I’m stoked to have, but at a time when volleyball was scarce, that’s how I got my reps and experience. It wasn’t the super glamorous path, but I’m grateful for that tour for continuing on and for USA Volleyball providing those opportunities to me so I could prepare myself more for international travel.

“Even just the development of the pipeline and creating not just the elite development program with Jeff Alzina and obviously Sean Scott had his hand in that, too, as it was coming in, but providing us the resources with … I was in the first lifting program for the Beach National Team with Anthony Darmiento at the Yard in Hermosa Beach, that’s where we started, and then ultimately moved into the Torrance facility and working with Christian Hartford there, too, was just…Christian was a massive part of my success in the later years of my career. Just seeing the evolution, it was cool for me to be part of that and go out and represent USA Volleyball and the development of USA beach volleyball at that time. It was awesome for me to have that support and to feel like there was a path for me to succeed in beach and there were people invested in my growth and development.