Phil Dalhausser, who plans to retire from international volleyball after the Olympic Games Tokyo 2020, and partner Nick Lucena pushed world No. 1 Cherif Younouse/Ahmed Tijan to the brink Sunday before losing 2-1 (14-21, 21-19, 15-11) in the single-elimination Round of 16.

“I’m trying to digest possibly the last international match with my buddy right here and how grateful I am to get to play with someone as great as Phil,” Lucena said.

Dalhausser/Lucena were the United States’ only team to return from Rio 2016, where they lost to eventual gold medalists Alison Cerutti and Bruno Oscar Schmidt of Brazil. Lucena’s now a two-time Olympian, and Dalhausser has been to four Games. In Beijing 2008, he won gold with then-partner Todd Rogers and was named Most Valuable Player.

Vintage Dalhausser was on display today as he scored 26 points, leading all players. The 41-year-old blocked seven Qatari attacks and served up three aces to go with his 16 attack points.

“I felt like I was playing really good ball coming up to this,” Dalhausser said.

Lucena added, “I’m proud of how we competed today and throughout the tournament. We played well; we played some tough teams. I thought we played well enough to win today. They just played a little bit better.”

Lucena was quick to point out that Younouse/Tijan trained with him and Dalhausser prior to the Olympics.

“We molded them up, now we’re just letting them lose. That team’s gonna be good,” Lucena said.

In the first set, Dalhausser/Lucena certainly played well as they handed Younouse/Tijan their first set loss of the tournament. A four-point run gave Dalhausser/Lucena a comfortable 5-10 margin, and they held it throughout the frame, eventually taking the set 14-21.

The momentum shifted in the second set. With the score tied late, Younouse/Tijan scored two straight to take a 19-17 lead. That was all they needed as three sideouts later, Qatar evened the match at one set apiece.

In the third, Younouse/Tijan used a 3-0 run to take early control, 5-2. The Americans didn’t back down, missing just three sideout opportunities, but they weren’t able to cut the deficit either. At 14-11, Younouse blocked an attempt from Lucena, clinching the match and eliminating the U.S. duo.

Two more American duos remain in contention for a medal. Alix Klineman/April Ross will play their Round of 16 match at 5 p.m. Pacific Sunday, August 1, and Jake Gibb/Tri Bourne play theirs at 6 a.m. Pacific Monday, August 2. 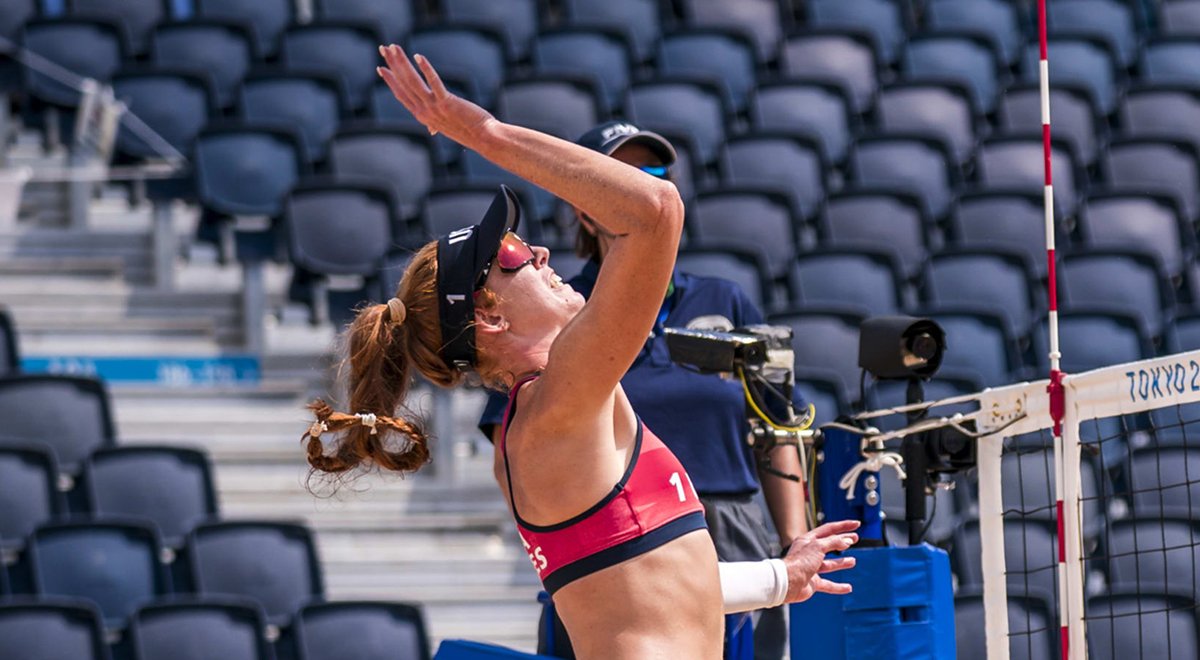 Team Slaes’ Olympic Run Ends in Round of 16

“We made more than enough opportunities for ourselves to win,” Claes said. “Fought through that first, up in the second, and we let them back in. Everybody’s good out here, so let that door open just a little, and here we are.”
In the third set, a ruling on a Sponcil serve raised questions on social media.

At 13-11 in the third, Sponcil served and it was called out of bounds. Claes/Sponcil challenged the ruling, believing the ball hit the tape. The challenge referee, Marco Spinnicchia of Italy, confirmed the original ruling of out, but a graphic showing the challenge as successful was accidently shown in-stadium and on the broadcast. Rules allowed for another review to clear up the confusion. The correct ruling – challenge unsuccessful – was displayed.

Targeted by most Canada’s serves, Claes led all players with 34 points, 29 on the attack. She added three points on aces and two from blocks.

Claes, 25, and Sponcil, 24, are the youngest beach team to represent the United States at the Olympic Games. They clinched their berth by winning the final two qualification tournaments of the year in Sochi, Russia, and Ostrava, Czech Republic.

Claes and Sponcil, known as Team Slaes on the FIVB World Tour, rallied to open the match with a set win. They took their first lead of the frame at 18-19 after a kill by Claes, saw a third set point on another Claes kill and then clinched when Bansley’s attack hit the net and rolled out.

That momentum carried into the second, where the U.S. took three separate early leads of six points apiece, the latest at 4-10. The Canadians rallied for a 21-18 set victory, however, forcing a third set.

The third set was just as close as the first with six tie scores in the first 12 points. Bansley/Brandie were the first to take a two-point lead, that coming at 8-6. Despite missing on just one sideout opportunity for the rest of the frame, Claes/Sponcil were unable to close the gap. Canada clinched the set 15-13 and the match two sets to one.