The loss was Gibb and partner Taylor Crabb’s second of the day and their final pool play contest of the FIVB World Tour Finals in Cagliari, Italy. The duo will end the tournament with a 1-3 record and five points. Currently, they’re in a three-way tie for second place in Pool A, but the two teams they’re tied with are guaranteed at least one point in the final round of pool play. Gibb/Crabb have a bye that round and will not play another match.

The top three in each World Tour Finals pool will advance to the playoff round. Gibb/Crabb can finish no higher than fourth.

Gibb, 45, leaves international volleyball as a four-time Olympian, playing in every Olympic Games since 2008. He’s also won seven FIVB tournaments and earned 25 international medals. He and Crabb have played together since 2017. They won the 2019 Chetumal Four-star event and took bronze at this year’s Doha Four-star.

A Team Wins Twice to Stay in Contention

Alix Klineman/April Ross entered Thursday looking for their first win at the World Tour Finals. They found that and more with two two-set victories to remain in playoff contention. They opened the day with a 2-0 (21-17, 22-20) win over Italy’s Valentina Gottardi/Marta Menegatti and also beat Tanja Huberli/Nina Betschart of Switzerland, 2-0 (21-18, 21-17).

Now 2-2 with six points, Klineman/Ross are tied for first in the Pool A standings but will not gain any more points; like Gibb/Crabb, they’re off during the final round of pool play. The reigning Olympic champions’ fates will most likely be decided by a match between Gottardi/Menegatti and Julia Sude/Karla Borger of Germany. Should Italy win, Klineman/Ross will finish no lower than third and advance. Should Germany win, Klineman/Ross and Sude/Borger will be tied for third place, and the team with the higher point ratio will advance.

Huberli/Betschart can also end with six points with a loss in their final pool match, meaning a three-way tie for second. That tie would also be decided by point ratio, which Klineman/Ross currently lead (1.0389).

Team Slaes, Kelly Claes/Sarah Sponcil remained unbeaten with a 2-0 (21-16, 21-16) win over the Netherlands’ Sanne Keizer/Madelein Meppelink. The Americans are tied atop the Pool B standings with four points, and they have the pool’s highest point ratio at 1.2436. While not yet guaranteed a spot in the playoffs, Team Slaes can clinch an advancing position with a win in one of their two remaining pool play matches.

On Friday, they’ll face Brazil’s Agatha Bednarczuk/Eduarda Santos Lisboa at 2 a.m. Pacific and Canada’s Sarah Pavan/Melissa Humana-Paredes at 11 a.m. Pacific. It is still possible for Claes/Sponcil to advance with two losses; they would need to hold a higher point ratio than the team(s) they tie with and finish among the top three in the pool. 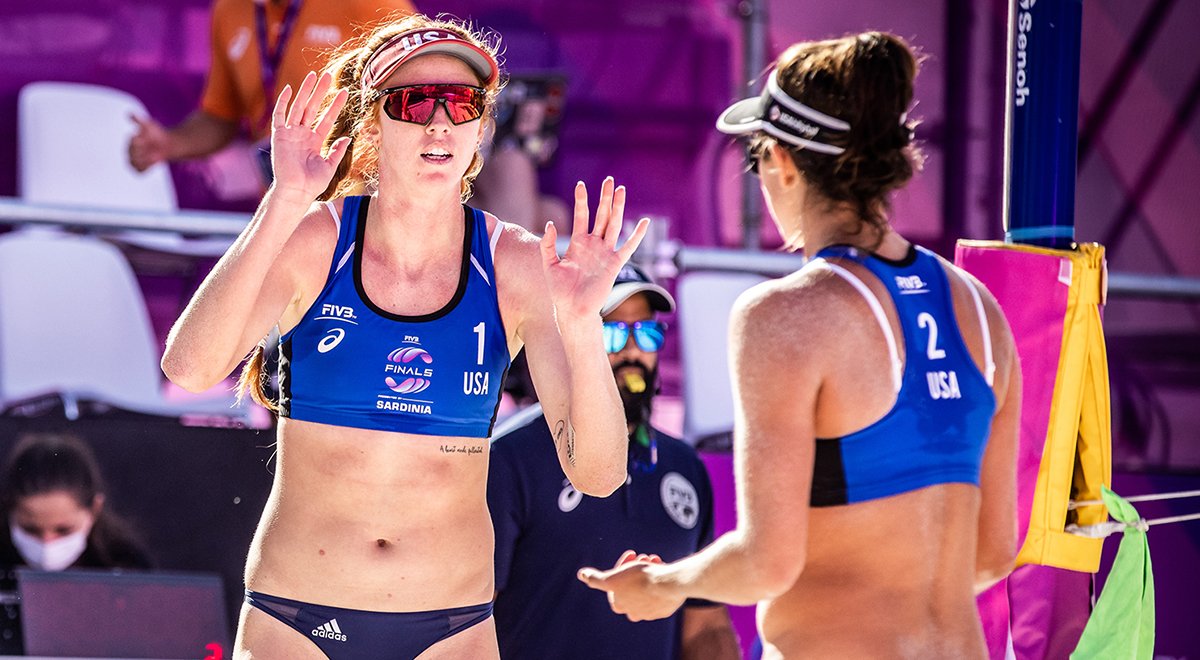