“It was really tiring. They’re such a good team,” Sponcil said. “We did a good job taking it point by point. We really just stuck in the moment and got some really good defensive plays in the end. We came out really strong in the third, which is what we needed to do against a team like that.

With the win, Claes/Sponcil clinched first place in Pool D and the No. 4 seed in the playoff bracket. They’ll learn their opponent for their first knockout match, the Round of 16, later Saturday.

The teams split the first two sets. Ana Patricia/Rebecca took the first 17-21, and Claes/Sponcil countered at 21-19 in the second. In the third, the Americans raced out to a 3-0 lead after a pair of Brazilian errors and a block from Claes. Ana Patricia/Rebecca called a timeout and earned a sideout on the next point, but Claes/Sponcil again went on a 3-0 run. Three points later, they enjoyed an 8-2 lead, capping the best 10-point stretch by either team all match.

Brazil rallied, pulling within three points at 8-5. From there, the teams traded sideouts until Claes/Sponcil led 14-11. Rebecca then missed a service opportunity, confirming the U.S. win.

“I think it was more of a mental match,” Claes said. “We knew they were gonna get their points, they’re such a great team. It’s being patient and waiting for the opportunities we can create and taking advantage of those.”

Brazil led the two sides in attack points (34-29) and blocks (6-3). Both teams served up three aces apiece, and the U.S. committed just eight errors opposed to Brazil’s 18. Claes scored 20 points herself, 17 on the attack and three at the net. Sponcil added 15: 12 attack points and three service aces.

Claes and Sponcil are the fourth American duo to advance to the Round of 16. Alix Klineman/April Ross won their pool as well, Jake Gibb/Tri Bourne finished second in theirs, and Phil Dalhausser/Nick Lucena took third. Dalhausser/Lucena advance to the playoff bracket automatically by being one of the top two third-place finishers with five points (two wins and one loss). 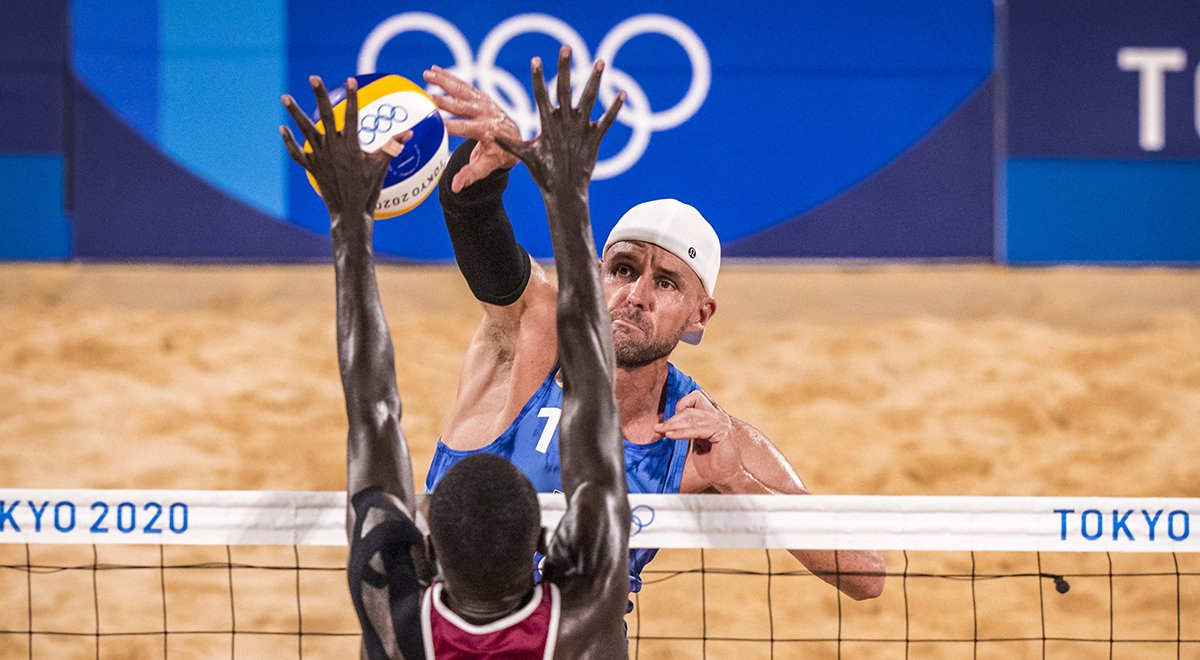 Both teams advance to the playoff round regardless of the result. Having finished second in the pool, Gibb and Bourne await word for their Round of 16 foe and match time. The Round of 16 of the Olympic Games Tokyo 2020 volleyball event will take place July 31-August 2 Pacific time (August 1-2 local).

“We’re in the draw,” Gibb said. “We came out second, we’re stoked. We’re entering the tournament as a two seed. I don’t know who we’re going to draw, but they’re in for a handful. We’re coming in blazing and we’re a couple of athletes ready to ball out.”

Against Qatar, the top-ranked team in the world, the U.S. duo held their own. They led or were tied through the first 20 points of the first set, then traded sideouts until two consecutive points gave Qatar a 14-12 lead. The lead didn’t grow much bigger, but the Qataris won the set by three.

In the second, the teams traded sideouts until 8-8, when Cherif/Ahmed scored three unanswered for the lead. They pushed further and reached match point at 20-14, but Gibb/Bourne kept up the fight, winning three straight to claw back. Bourne began the stretch with a kill off Ahmed’s hands and into the seats, then he ripped a serve that forced the Qataris out of system, resulting in an attack wide. One more Qatari error pulled the U.S. within three before Cherif ended the match with a sideout.

Both Americans ended the night scoring 12 points apiece, 11 on the attack. Bourne added an ace, while Gibb blocked one attack.

“I’m glad this guy’s on my side of the net going forward because I think he can be a problem,” Bourne said of Gibb. “I’m excited.”