Americans Prevail Twice in Wet, Windy Day at the Beach

“That’s a team that’s going to contend for a medal and to win this tournament,” Dalhausser said about the Brazilians, one of whom – Alison – won gold in Rio 2016. “To get a win off of them is special.”

Each set was close, none more than the first, which featured 14 tie scores and five lead changes. Dalhausser/Lucena turned aside three set points – two consecutively at 18-20 and 19-20, and another at 20-21 – en route to the set win. Tied at 22-all, Dalhausser landed an attack for the lead. They clinched when an attempt from Alison missed its mark.

Aside from the first point, the U.S. trailed all second set but didn’t hand victory to the Brazilians easily. Dalhausser/Lucena rallied from seven four- or five-point deficits in the frame, pulling within one at 18-19. Brazil won two of the final three points to even the match at one set apiece.

Dalhausser/Lucena held a lead throughout the entire third set. A 6-1 run put the U.S. duo up 12-7, although Brazil countered with four straight of their own to pull within one. The teams then traded errors before Lucena handed the U.S. match point by finding empty sand. Alvaro Filho pulled one back for Brazil, but Lucena finished it off with another point, clinching the 2-1 match victory.

The Americans led the way with 38 points off the attack, although the Brazilians narrowly led in blocks (7 to 6) and service aces (2 to 1). Lucena scored 23 points, one more than Dalhausser and two more than Alvaro Filho. Both Alison and Dalhausser blocked six shots.

Dalhausser/Lucena, now tied at 1-1 with Alison/Alvaro Filho in pool D, will wrap up pool play Wednesday, July 28 at 7 p.m. Pacific. They’ll face Argentina’s Nicolas Capogrosso/Julian Amado Azaad in a match that will determine if the U.S. duo advances to the knockout stages, if they’ll play in a Lucky Loser contest, or if they’ll finish fourth. 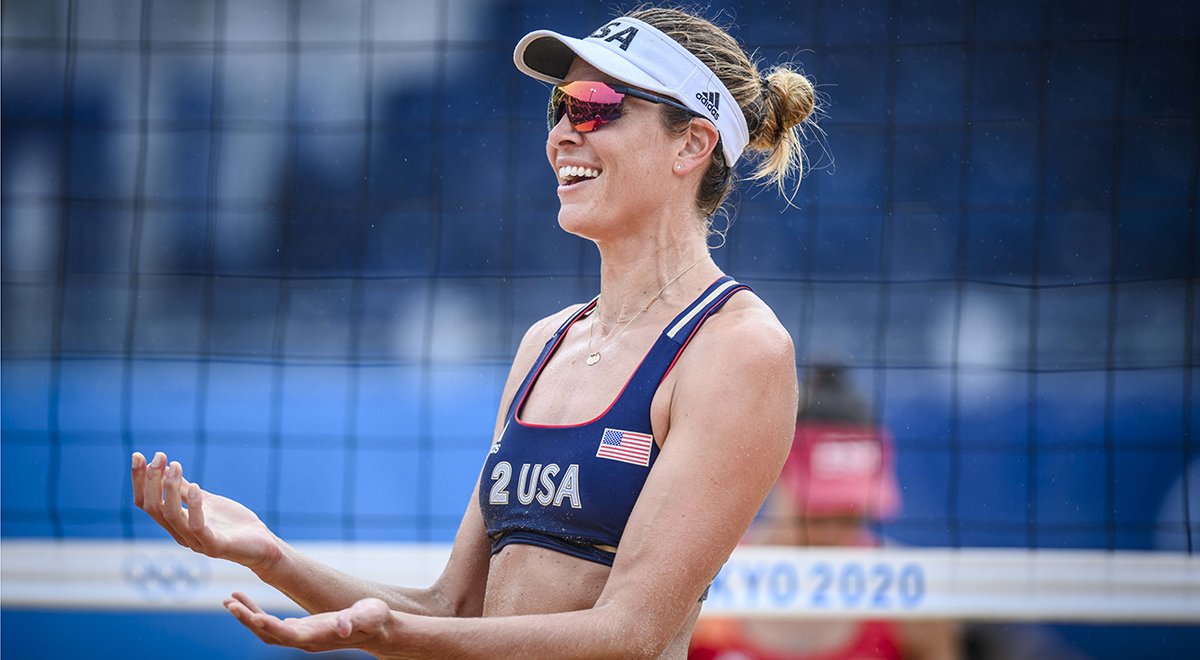 Klineman/Ross in Control During Sweep of Spain

“We’re super happy,” Klineman said after their win. “That Spain team can get really hot sometimes, and they’ve given us a hard time in the past. To have our game plan go so smoothly is awesome. We came out with a lot of intensity and a lot of energy. We executed things pretty well, and we’re really happy with it.”

Come out with intensity they did as the American pair quickly took a 5-2 lead to start the match. Spain pulled back within one at 8-7, but Klineman/Ross countered with a four-point run to push the margin back out. They kept at least four points ahead the rest of the way, winning the set 21-13.

The second set followed a similar pattern. Klineman/Ross jumped out to a 4-1 lead, and they maintained at least a two-point advantage throughout, clinching at 21-16.

As expected from the scoreline, U.S. dominated the statsh¬eet, outscoring Spain 25-14 and serving up five aces. Ross led all players with 19 points, 15 on the attack and four from the service line, and Klineman blocked two Spanish shots. She was also an ultra-efficient 10 of 13 on the attack.

Klineman/Ross will look to win pool B Thursday, July 29 at 5 p.m. Pacific when they line up against the Netherlands’ Sanne Keizer and Madelein Meppelink. That, as with all beach volleyball matches at the Tokyo Olympics, will be played at Shiokaze Park.