Presley Murray/Kendra Brown’s (Florida Region) reunification paid off this summer. In their first season as partners again after taking a few years off, they won a national title.

“We started playing together when we were 13 or 14,” Brown said. “We stopped for a bit but started up again this summer.”

The pair shook off a loss in their first match of the tournament to go undefeated the rest of the way. After a 5-1 pool play record, they began the playoff bracket in the Round of 16. Once in knockout play, they won three consecutive two-setters for a spot in the finals against Jasmine Haas/Kennedy Coakley (Ohio Valley/Florida Regions). Haas/Coakley narrowly won the first set, but Murray/Brown came from behind to win, 2-1 (19-21, 22-20, 15-12).

Like everyone competing in the Beach National Championship, Ayden Keeter/Zadyn LaBreche (Southern Region) faced competition against both their fellow competitors and the weather.

“The heat and humidity are crazy,” Keeter said after winning the Boys 18U title. “If you’re not drinking a lot of water and a lot of electrolytes, you’re going to cramp. We didn’t cramp, so that’s good.”

Playing three matches on finals day, there was plenty of opportunity for cramps. The duo from C2 Attack in Hendersonville, Tennessee, swept through their quarterfinal matchup and set up an intriguing semifinal against club teammates Caleb Blanchette/Tate Colebaugh. Keeter/LaBreche came out on top, earning the right to play another tough match in the finale.

“Our finals match was the hardest,” LaBreche said. “That second set was a dogfight.”

It’s the duo’s second medal at a USA Volleyball championship this year; they powered their C2 indoor team to 17U Open bronze at the Boys Junior National Championship in July.

Erin Miller/Brianna Luoma (Premier Beach Volleyball, Florida Region) won the Girls 16U title as the playoff bracket’s top seed. After going 7-0 during the two group phases, they swept through the Round of 16, won a 28-26 single-set quarterfinal, and picked up a close two-set win in the semis. In the finale, they lined up against Mollie Thomas/Mia Scanlon (Gateway Region). The first frame went into extra points, which Miller/Luoma won. They cruised to victory in the second set to clinch the title, 2-0 (23-21, 21-13).

The duo from MB Surf in Manhattan Beach, California, went a perfect 10-0 to capture the Boys 16U title.

“This feels great,” Dykstra said. “We worked all year toward this, and we got it done.”

“We had to keep the consistency up the whole time,” Gronbach said. “The opponents were good.”

Bella Scherfenberg/Thais Treumann (Heart of America/Florida Regions) went undefeated in Fort Lauderdale, capping an 11-0 tournament with a national title. During both rounds of pool play, they allowed at most 15 points (pool play at the USA Volleyball Beach National Championship consisted of one-set matches to either 21 or 28 depending on pool size). During the playoffs, they won three straight matches without dropping a set, ending with a 2-0 (21-17, 21-18) win over (Sandstorm Beach VBC/Vibe Volleyball Academy, Florida Region).

Sam Young/Brock Harvick (North Texas Region) proved they could win every type of match en route to the Boys 14U title. After dominating in pool play – they held their opponents to seven or fewer points during five of seven single-set matches – they won their first two full matches in two sets (21-15, 21-10; 21-18, 21-14) to clinch a finals berth.

Brooke Codey/Dreya Scherfenberg (Pioneer/Heart of America Regions) won the Girls 12U Open crown, capping an undefeated tournament with a national title. The pair won their pool and playoff matches handily to earn a spot in the title match. In the finale, they faced Caitlin Carrizales/Dakota Richard (North Texas Region). Codey/Scherfenberg were tested, but they pulled out a 2-0 (21-19, 22-20) win for the title.

Kaylee Howell/Rebecca Blaydes (S3 Volleyball, Southern Region) were undefeated heading into the Girls 18U American playoffs, but they were not the bracket’s top seed. That designation belonged to Lilly Hafner/Andrea Dietz (Optimum Beach; Florida Region). The two met in the championship match, and Hafner/Dietz struck first with a 15-21 set win, but Howell won the second in an extra point, forcing a third set. Howell/Blaydes won the tightest of third sets and won the division on a 2-1 (15-21 22-20, 15-13) score.

Grace Jansen/Mykaela Wallen (Progression Beach Volleyball, Great Lakes Region) went undefeated through two rounds of pool play to begin the tournament. After two playoff victories, Jansen/Wallen met the bracket’s top seed, Marissa Peck/Oceanna Roth in the quarterfinals. Playing one set to 28 instead of a best-of-three match, Jansen/Wallen won 31-29 for an upset semifinal berth. A 28-15 semifinal win meant a championship berth, and they beat Sarah Smith/Alexa Smith (Optimum Beach Volleyball) in the final for the title.

In the finale, they faced Madelyn Powell/Alexandra Colon (GCVA Beach; Lone Star Region), who began bracket play in the Round of 32. Powell/Colon’s remarkable playoff run left the pair with a 10-2 record in the tournament. Their only two losses came to Badyna/Snider.

The Beach National Championship may not have started ideally for Alexa Turoff/Emma Burnside (MadSand, North Texas Region), but it sure ended well.

The pair lost their first match of the competition, 28-23. They rebounded to finish the first pool at 2-1 and swept through their second day of pool play. Despite the opening loss, they were one of three squads that earned berths directly to the quarterfinals. Turoff/Burnside won their quarterfinal, swept a two-set semifinal contest, and beat Whitney Mertens/Reese Pedersen (Nebraska ONE, Great Plains Region) 28-20 in the finale for the title. 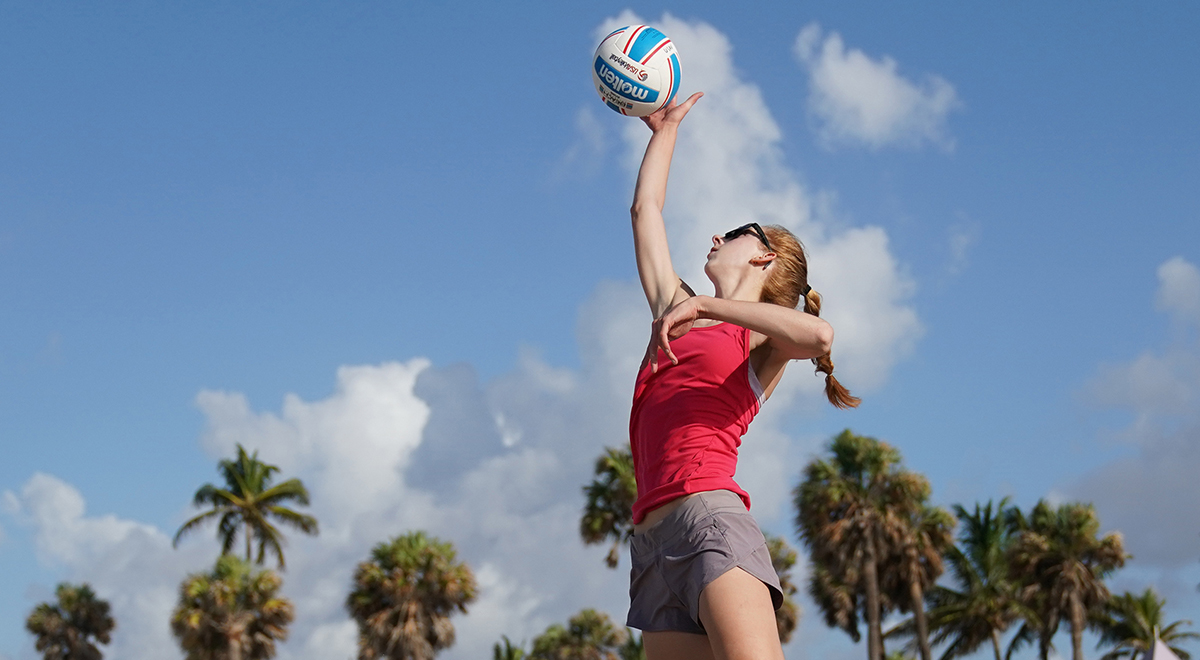 The USA Volleyball Beach National Championship will run July 26-28 in Fort Lauderdale, Florida. Over 320 beach volleyball pairs will compete for a national title. 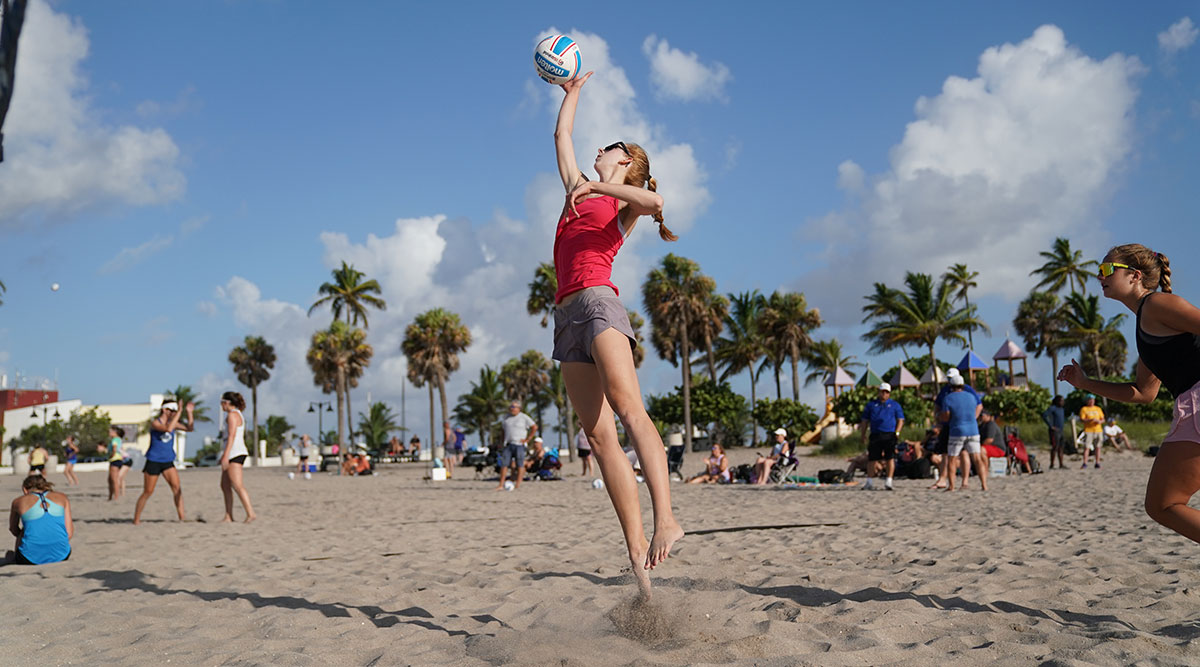 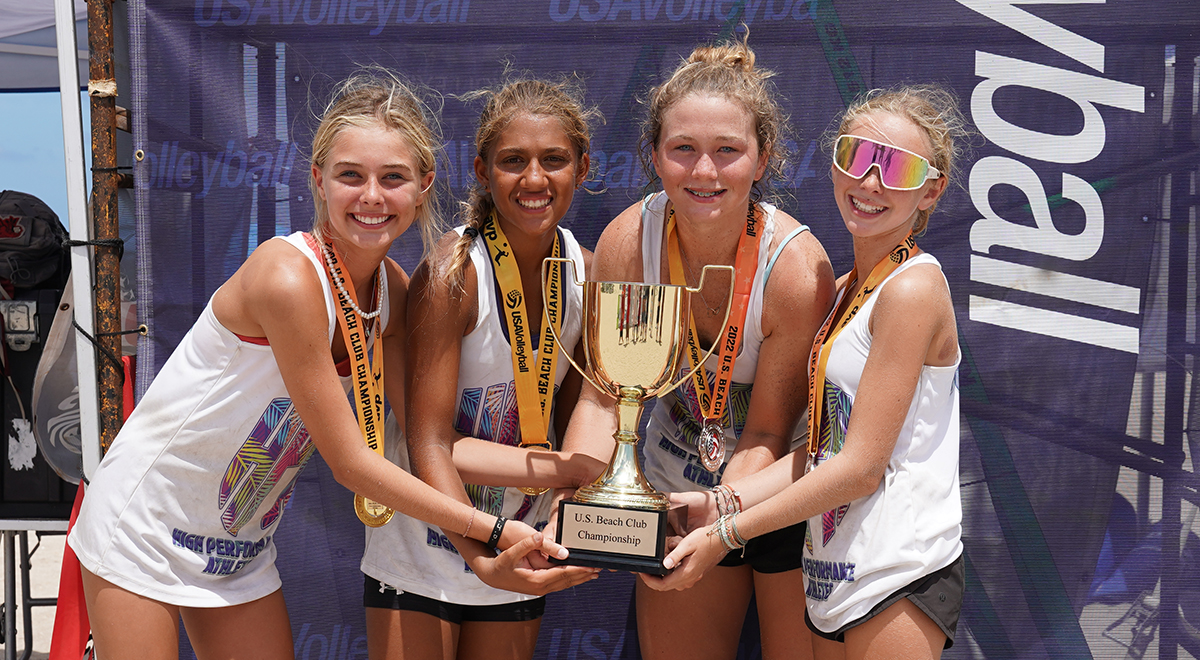 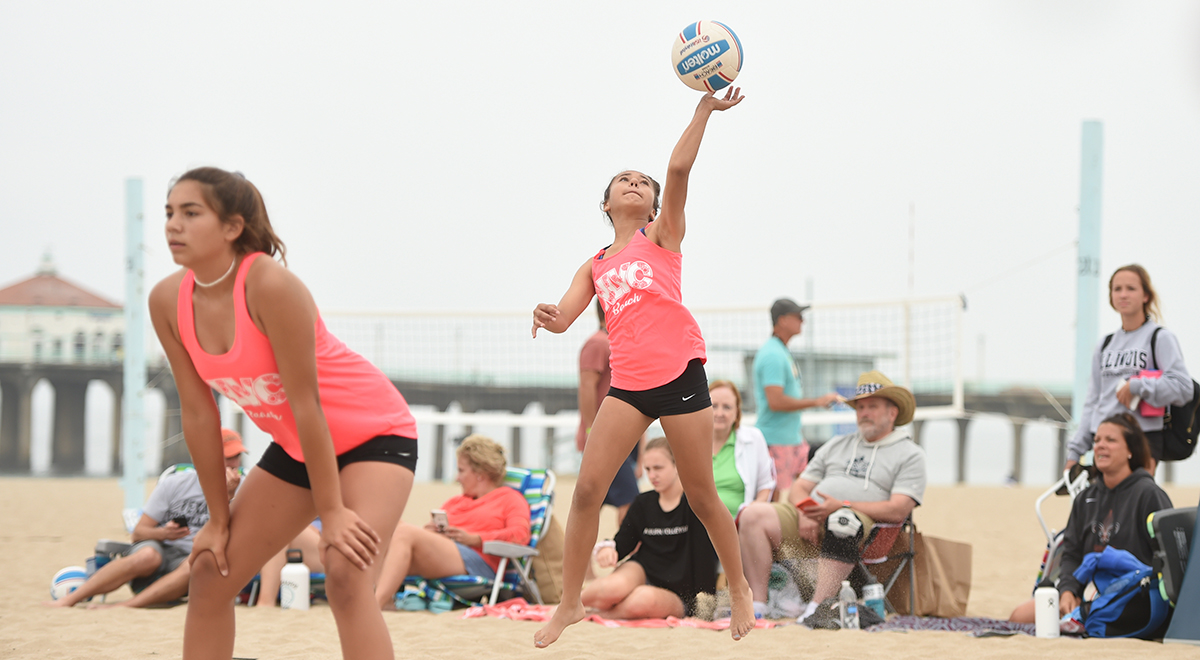 The U.S. Beach Club Championship will run July 29-31, 2022 in Fort Lauderdale, Florida. It allows beach volleyball clubs to compete for the title of top club.